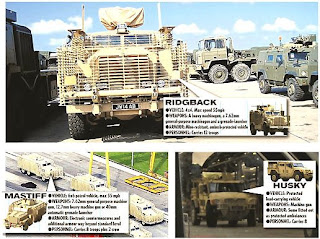 With one more soldier killed – yet another by an IED while on foot patrol – the total casualties for Afghanistan now stand at 196. In the deadly arithmetic of the media war, this is four short of the "magic" figure of 200, which will be the trigger for a torrent of media coverage.

With the current rate of loss, the bi-centenary could well come by the end of this week, giving the Sundays a free run. Given that we are in the middle of the "silly season" with very little competition on the news agenda, the likelihood is that the MoD will be in for a torrid time.

It is not untoward that the Taleban, conscious of the power of numbers, will be looking for a "spectacular" to maximise the media headline count. In The Sunday Times today, we have an intimation that the Taleban have a specially trained group, for precisely that purpose, its task being to mount attacks, to achieve a "spectacular" effect whereby several British soldiers are killed at the same time.

In effect, what we might be seeing is the Taleban setting out to "kill to order", aiming to maximise media coverage and thereby maximise the impact on the UK audience.

If that is the Taleban aim, then they will have been considerably assisted by the number of "own goals" perpetrated by the MoD and the Army, not least in the delayed deployment of the Ridgeback. The Dubai incident has very much lodged in the collective media brain, to be absorbed as part of the narrative.

Although it has not yet fully registered that the Army is responsible for some of the delay, the delays in getting equipment to theatre is a story that very much has "legs". It is given a boost today with the News of the World reporting that Ridgebacks and other armoured vehicles are being stockpiled at the depot in Ashchurch in Gloucestershire, instead of being sent out to theatre (pictured above).

What also has not yet registered is the extraordinary delays behind the whole Ridgeback programme. Mooted in October 2007, the intention to order was announced personally by Gordon Brown in December 2007. By June 2008, the theatre "fit" and been finalised and in August 2008, with great fanfare, the MoD announced that the first five vehicles had arrived in the UK for theatre conversion (picture below) - flown in to minimise delays.

With the vehicles not planned for deployment until October/November of this year (and then only some of them), this means that the best part of two years will have elapsed for what was an Urgent Operational Requirement to have been fulfilled. By contrast, when the Mastiff was ordered in August 2006, it was deployed in Iraq and in active service by the February of the following year – less than six months from the ministerial announcement. 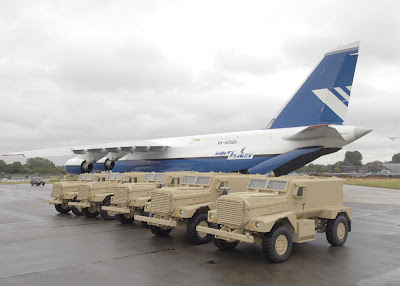 The delays in fielding the Ridgeback, however, may not be purely the result of bureaucratic inertia. The Army has invested heavily in the Jackal and, to an extent, staked its reputation on its success. But, as we remarked in April 2008, there is doctrinal competition between the Ridgeback and the Jackal.

Although both have their niches, there is a certain amount of overlap between capabilities. Side-by-side on operations, the Jackal would compare unfavourably with the Ridgeback in any number of roles for which it is currently deployed, including convoy escort, for which the vehicle was never designed.

With the Army already having been forced to retire the Snatch, the Vector and now the Viking, to invite comparisons between the vehicles on actual operations, and to have the Ridgeback perform better, would be a mortal blow to the Army's pride, while being forced to retire yet another vehicle, in which so much has been invested, would have profound implications.

Thus, to delay the intoduction of the Ridgeback until the more heavily armoured (but still inadequate) Jackal 2 is fully deployed, gives the Jackal a better chance to shine against the competition. The Sunday People is already putting the pitch for the Army.

Furthermore, as it stands, on off-road mobility, the Jackal has the edge. But one wonders also whether the Army is deliberately attempting to maintain an unlevel playing field, by taking on charge the basic Cougar platform and not insisting on the upgraded suspensions which US forces are retrofitting.

Since the unique selling point of the Jackal is its mobility – which can only be degraded as more and more armour is added in an attempt to overcome its fatal weaknesses – it will do the Jackal advocates no harm at all of the Ridgeback off-road performance is less than optimal.

However, while the Army plays its games, and men die, the real world is catching up. The Taleban is completely uninterested in Army procurement politics and, since it has the measure of the Jackal, one can be sure that it will continue to exploit its weaknesses.

As the counter ticks towards the 200-mark, the media is not going to be interested (or even understand) the nuances. It will see the issue as Jackal versus Ridgeback in simplistic terms, and tear the MoD apart. Whether the Army gets caught up in the flak is moot, but it may have difficulty hiding behind the politicians this time, especially when they have been pushing the Army to get the vehicles into theatre.

Soon enough, we will know whether it is soldiers' lives or Army dogma that will prevail.