Three dead in a Jackal 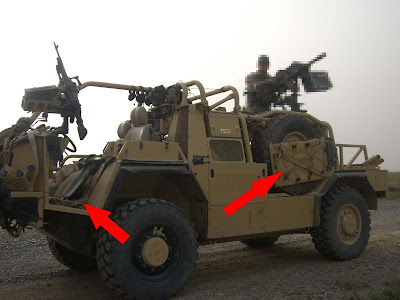 The Times and others are reporting that three soldiers have been killed by an IED during a special operation north of Lashgar Gah, while riding in a Jackal.

The soldiers were all members of the Special Forces Support Group (SFSG) which was formed to add extra firepower and assault capability to the SAS and the Special Boat Service (SBS).

Writes Michael Evans in The Times, "the Jackal armoured vehicle, sent out to Helmand to provide extra protection - it was designed to be mine-resistant - has proved vulnerable to the increasing size and potency of the Taleban’s improvised explosive devices (IEDs)."

The Daily Telegraph notes that it has previously been estimated that at least of quarter of the 100 Jackal fleet in Afghanistan have been severely damaged or destroyed by enemy action.

It thus reports that: "There is no doubt that the Taliban are targeting the Jackal upping the dose of explosives everytime," a defence source said in June, with the paper having first published concerns about the Jackal in March when five servicemen had been killed and MoD later confirmed that 18 of the vehicles had been targeted in attacks.

It was believed that the Taliban were deliberately targeting the vehicles because of a high success rate, the paper adds, stating that the Jackal has been seen as particularly vulnerable because the driver sits over the top of the front wheel which is generally the first point of contact with a bomb, it has Kevlar anti-ballistic protection rather than steel blast cover and it does not have a V-shaped hull to deflect the blast.

However, there may be more to this than meets the eye. Three killed in a Jackal (with one more critically injured) is an unusually high number, even for this vehicle and Evans may, therefore, be making an assumption in calling the vehicle "armoured".

As we reported two years ago the SFSG were issued with Jackals (then called M-WMIKs) about a year earlier than the rest of the forces. But the vehicles were completely unarmoured (pictured). Then, the troops were so worried about the kit that they were scavenging Kevlar pads to put on the seats and vulnerable points, in a vain attempt to add protection (arrowed).