No wonder we are in trouble 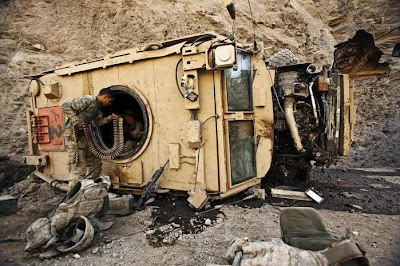 An official involved in the design and engineering of armoured vehicles has denounced the recent criticisms directed at the Armed Forces' fleet, calling them "inaccurate", "dangerous" and "ridiculous."

So says Defence Management, allowing the official to retain his anonymity, yet allowing him the claim that he "has worked closely on the design of several armoured vehicles including some of the MRAPs."

The man - let's call him Mr Smith - says that he felt it was time to dispel some of the running myths in the press about armoured vehicles and what does or does not make them safe.

Our Mr Smith starts by noting that criticism of armoured vehicles has grown over the last year due to the perception that they are increasingly vulnerable to IED plus, he says, "a number of procurement gaffes on the part of the MoD." These appear to include the Snatch Land Rover, the Viking and the Vector armoured vehicles - withdrawn from service due to their inability to protect passengers from explosions and the high number of casualties that have occurred in them.

He also notes that there have been questions over the design and safety of the Panther and Jackal vehicles - although they remain in service – and then acknowledges that the MoD and industry were not perfect. Nevertheless, he avers, criticisms of the [current fleet of armoured vehicles] are "largely untrue".

Without going any further, we can tell that we have an odd sort of a person here. Anyone inclined to address criticisms as "inaccurate", "dangerous" and "ridiculous" is someone who is inclined to dogmatism. Then to brand them as "untrue" is bizarre. Criticism may be right, it may be wrong, it may even be misplaced, or any number of things, but truth does not come into it.

Looking then to win the one-sided debate, he employs the trick of the polemicist, framing the debate as one of "mobility v. protection." Vehicles ripped apart by IEDs and mines, says Mr Smith, are often the more mobile models that can quickly transport troops across the battlefield or help them escape a firefight.

Having thus established the desired framework he creates for himself a false comparator, defining the classic "straw man" alternative. This, predictably, is "using the heavier armoured vehicles such as the Mastiff and Ridgeback, which although better protected are far less agile."

The trick here is in defining these two vehicles as "heavier armoured", on which basis he attacks our argument that having one or the other is "a false paradigm." Says Mr Smith, "If you want more protection, you are going to be using more weight." Thus, "simple physics" wins the argument: "More armour equals more mass and more mass equals less acceleration. Essentially one cancels out the other."

Of course, we don't know Mr Smith well enough (or at all) to ask him any questions, but if we were to have the opportunity, we would like to know which he thinks is the better tank – the German Panzer Mk IV (Ausf H) at 25 tons, the Russian T-34 at 26.5 tons, the British Churchill at 38.5 tons or the US Sherman at 33.4 tons.

Then he might address the question as to which specific feature the Germans copied from the T-34 when they produced the Panther tank.

Straight from the Janet and John school of armoured vehicle design, however, Mr Smith's view of how to limit weight "is to make the vehicles smaller," and, not being averse to patronising his audience, he tells us: "People do not understand that there is a trade off between firepower and protection vs. mobility." I think we knew that, but that is not all there is to it.

Obviously unaware of the world around him, Smith then blandly informs us that "the chance to revise the vehicles after testing in order to make them more mobile is simply not possible." Clearly, no one told the Americans.

But he is right in one thing: "To go back and install mine protection is difficult. Unless you designed it from the start, the cost and operational compromises is not going to be worth it."

From there, however, Smith loses it. Advocates of more mobile vehicles have argued that protection should be built into the design of the vehicles such as V-shaped hulls, he says, adding:

The guaranteed safety that V-shapes hulls provide are something of an urban myth. For it to be effective, a blast must hit the vehicle right at the point of the V. If it hits anywhere else, the blast would not be properly deflected.

From there, he tells us:

Early mine attacks saw insurgents put mines in the middle of a road. Today IEDs are made up of multiple parts and explosives and can be placed anywhere in the vicinity of a road. For the V-Hull to be effective a blast would have to hit right under the point of the hull. Square hulls are therefore still a valuable design tool as long as they are properly armoured.

This is terrifying. This is a man who claims to be involved in armoured vehicle design, and he can seriously say that for a v-shaped hull to be effective, "a blast must hit the vehicle right at the point of the V." Thousands of soldiers, in thousands of MRAPs, hit by thousands of IEDs would say otherwise.

But it is also insulting. Blast protection is not solely a function of the v-shaped hull. There are other design principles involved, which we outline in another piece. If Mr Smith has heard of them, though, he does not mention them - yet our criticisms are "inaccurate", "dangerous" and "ridiculous."

And as for the "properly armoured" square hulls ... fine – if you want your vehicle weighed down by massive armour plate and then flipped over on its back by the force of a blast. Mr Smith, one feels, would design ships with square bows.

At last, though, we get to Smith's pride and joy - the Jackal. This time, criticisms are not "untrue". They are "unjustified" since it is not actually an armoured vehicle, rather a vehicle that has armour on it. So that's alright then. Because it was not designed ab initio as a mine protected vehicle and is thus extremely vulnerable because it only has "bolt on armour", the criticism is "unjustified".

Similarly "unjustified" is the criticism of the "fatal flaw" of having the front passengers ride above the wheels. That, says Smith, is not the fault of the Jackal. The problems stem from the way the vehicle is used, not its design. "When it hit the market, it was designed for a specific task. It was designed to travel across country in off road conditions."

"Now it is being used to protect convoys and provide cover and protection. It becomes the focus of attacks. The Jackal was never designed for convoy protection," he adds, then declaring: "Weaknesses are bound to emerge. But you leave it up to the commanders at the front to use the vehicles as they see fit."

So does Smith rest his case. He came forward with his statements because "he felt it was time to clear up a number of inaccuracies reported in the press and to begin restoring the image of the armoured vehicle industry."

The 14 dead so far in Jackals will be mightily impressed. And, if they can hear Mr Smith, they will surely agree that that their premature deaths arose because of the way they used their vehicles. But then, they might have preferred to have driven in the type of MRAP pictured above, from which the crew escaped shaken but unhurt, after the v-shaped hull took a massive blast under a front wheel.