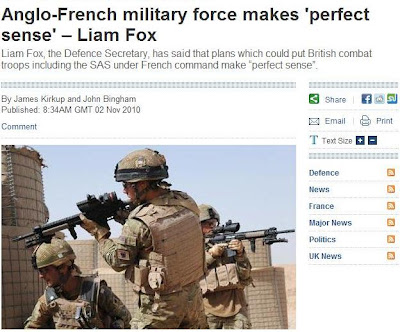 What is incredible is how blatant it all is, and how easily they lie through their teeth as they "insist" that this will not give the European Union a role in Britain's defence policy. Despite their denials, the great greasy-pole merchant Liam Fox - so ambitious he would sell his mother for a farthing if it bought preferment - has sold us out to the forces of European integration, cosying up to his euroslime master Cameron in the process.

A treaty creating a new joint Anglo-French rapid reaction force would serve both countries’ interests in a world "where resources are tight", he says, as his traitorous master is set to announce the creation of a new Combined Joint Expeditionary Force (CJEF) of around 6,500 troops from the two countries under a 50-year deal for closer military "co-operation".

It is expected to include units from the Parachute Regiment, the Royal Marines and Special Forces including the SAS, as well as their French counterparts. The CJEF, they say, is the centrepiece of a new Anglo-French military co-operation treaty being unveiled by Camerslime and TLOTK Sarkozy at a summit in London today. 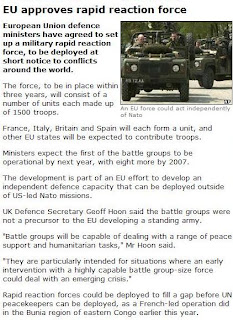 Needless to say, this "new" Combined Joint Expeditionary Force is not new. It is simply a battle group, along the lines agreed in 2004 as the core part of the European Rapid Reaction Force. Under the guise of "economy", euroslime Cameron is selling out to the euroweenies, doing more for European integration in his first year of office than Blair did in thirteen.

Of course, the lame and the stupid are wittering on about this being "a bilateral, not a supranational endeavour," which is complete and total cant – a staggering insult to our intelligence.

But for all those dim little Tories, all this does is go to prove is that the only thing more stupid than a Tory politician is a supporter of the Tory party. As they trill away about this not being a repeat of Tony Blair's St Malo summit – which is exactly what it is – all you can hear is the sound of their brains gushing out of their backsides. 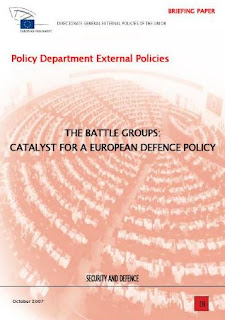 This is a continuation of the Maastricht Treaty agenda, as this briefing note makes clear. Agreed by the Tories under John Major, this set up the parameters for the development of a European Security and Defence Policy (ESDP). The process continued with the Franco-British meeting in Saint-Malo (France) in December 1998. That was when London and Paris agreed to jointly and actively work to make the European Union "able to carry out some security tasks on its own".

During the period 1999-2003, the EU set up relevant political-military structures to assess, decide, plan and execute military operations and now it is "moving ahead" to embark on a "second round". And that is what this is, the "second round" - building the ESDP, planning and organising new military "cooperation" and integration among EU member states. This is the Trojan Horse or, as the "colleagues" say, the catalyst.

With it, our military heritage is being sold down the river by the euroslime. These are black days. We have traitors in our midst, surrounded by fools who've woken up too late.