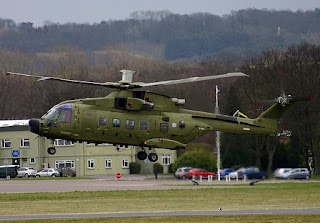 The demand for more support helicopters in Afghanistan cannot be met fully because there are not enough crews to fly them, RAF commanders have acknowledged. Five trained crews were required for each one to ensure safety. So says The Times which cites Air Commodore Simon Falla, deputy commander of the Joint Helicopter Command.

He also reveals another reason why Britain could not send too many more helicopters to Helmand - a shortage of parking space. "There is pressure on real estate. There is this cry for more helicopters but where are you going to park them? They have to be parked somewhere," he says.

Backing up the military inertia is defence secretary Bob Ainsworth, who blandly declares that the military will not be rushed into redeploying Merlin helicopters to Afghanistan, as "we won't jeopardise safety".

The helicopters are on now display at RAF Benson in Oxfordshire, following the return of the last two from Iraq. A flypast took place to celebrate their achievements, with senior RAF and Joint Helicopter Command officers gathered at the base, along with friends and families of personnel from the armed forces.

Meanwhile, the Canadian government has announced a $1.15 billion contract for 15 new CH-47F Chinook heavy-lift helicopters, which are expected to be delivered between 2013 and 2014.

Presumably, the Canadian government have already booked the parking slots, and one assumes that pilots will be found to fly them – unless, of course, the Canadian military take lessons from the British military and find ever more inventive reasons why the aircraft cannot be deployed.