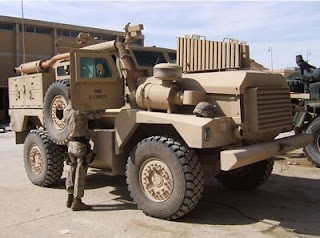 After what seem interminable delays – with the announcement having made in Parliament in December – a formal notification has been made to Congress that the UK is looking to buy 157 Mine Resistant Ambush Protected (MRAP) vehicles with associated equipment and services. The total value, if all options are exercised, could be as high as $125 million.

These are the Force Protection 4x4 Cougars which, in British service, will be named "Ridgebacks" and, although the order has not been formally placed with Force Protection, this is the final stage of clearance before a sale can go ahead. It would seem reasonable now to assume that we will shortly be hearing the final details of a contract with the British government.

This will not, of course, be the end of it. As with the Mastiff, the basic vehicle will be heavily modified in the UK, with the possibility of additional armour, plus the fitting of ECM and communications equipment. Additionally, as far as we know, each vehicle will be fitted with a stabilised, remote weapons system, allowing the gunner to engage targets from within the protected vehicle cell, with – as far as we understand – a very high level of accuracy and a high probability of first round kill, even at extreme ranges.

Thus, the arrival of the Ridgebacks in Afghanistan will represent more than just a new batch of vehicles on the inventory. The type represents a major doctrinal shift from the current philosophy, represented by the Land Rover Wimik and now the Supacat Jackal. 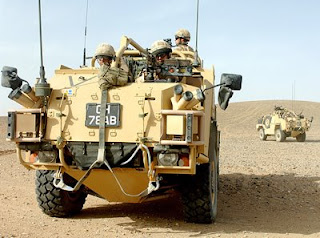 These latter vehicles – in theory at least – optimise off road performance, speed and manoeuvrability, but at the expense of protection. The Ridgeback, on the other hand, is specifically designed with protection in mind, offering a more limited off-road performance and slower speed. In terms of armament, it lacks the second machine gun, although the remote weapon station has the advantage of accuracy, range and protection, not offered by the crew-served weapons of the Jackal.

In many respects though, the Ridgeback and the Jackal will do the same jobs – or, if not exactly the same, there is bound to be some overlap. Both, for instance, can provide fire support, both can carry out long range patrols and both can provide convoy escorts.

There is now, therefore, an interesting opportunity to test two rival doctrines in the field. Operational requirements will, perforce, show up the limitations and the advantages of each approach and, after a period of parallel operations, it should be possible to come to a better view on their respective merits and roles.

If the MoD is at all honest (there is a first time for everything), it will in the fullness of time publish a comparative evaluation, not least to assist policy-makers and others in making the right choices