In place of flesh and blood 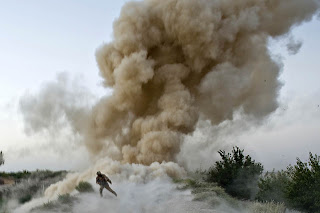 We need to remind ourselves occasionally that, while it is very easy to deride the efforts of journalists, those who are embedded with troops in the field do take very real risks.

That is brought home by the latest piece from Tom Coughlan, doing what he does extremely well, reporting from the front. And this time, out on patrol south of Garmsir with the Fox Company of 2nd Battalion, 8th US Marines, he nearly gets blown apart by an IED for his trouble.

This, however, is no derring do account. Coughlan manages to weave this into a clinical account of the difficulties encountered by a squad on foot in hostile country, ambushed by enemies who refuse to show themselves and resort to multiple and increasingly complex IED ambushes.

The bomb which nearly ended Coughlan's life was two devices strapped together, buried at the base of the wall on the corner of a compound, to which the Marines were advancing. Two men were badly injured: one, a Marine with shrapnel injuries to his face and hands, would survive; the other, an Afghan interpreter, would later die.

They were part of a force of 40 Afghan soldiers and 70 Marines, supported by two (Cobra) attack helicopters and a UAV. One hour into the patrol, at 6.45am, the ambush began. The thump of the first bomb detonating and sound of enemy small-arms fire was quickly followed by a call for casualty evacuation.

As the Marines began to run for cover, their commander, Captain Junwei Sun, senses a trap, telling his men: "Watch right, we could be being baited for another IED." He was right. There was a second IED placed so as to catch the squad as they ran for cover.

Fortunately, although smoke and debris enveloped the men, there were no injuries. The Taleban bombers had made several mistakes in the way they had made and buried their devices, the result being to channel their force upward rather than outward.

They had also incorrectly wired what was to have been a third bomb. Discovered and destroyed by US combat engineers some minutes later, it was 30lb of fertiliser-based explosive that sat directly under the commanders of Fox Company. Had all three blown correctly it is likely that a dozen or more soldiers would have died or been badly injured.

Despite this, the presence of the bombs give the tactical advantage to the Taleban. Caught in a spider's web of bombs, the men have to move out into the exposed fields rather than take cover. But, notes Coughlan, if the Taleban were still around they remained hidden, wary of the Cobra helicopters overhead.

This enables the unit's bomb disposal engineers to sweep methodically with metal detectors. They find naked, hair-thin copper wires in the soil, trailing towards the treeline and a compound 100 yards away. But, as the Americans prepare to advance on the compound with ANA soldiers, the Taleban deploy another "weapon": a group of women and children emerge, moving into the middle of the unfolding battle and making for the same compound. The attack has to be halted.

Then, as the troops move forward again, engineers find a fourth bomb, buried in a wall. This is defused and the advance resumes. But, as they traverse a field, one soldier spots two stakes buried in the ground. They are a marker for a watching bomb triggerman. The unit halts and explosives experts moved forward with their minesweepers. They find a command wire and two separate 40lb cylinders of explosive. These are detonated, scattering earth over a 100 yard area.

As they pull up the wire they discover it appears to lead to the village mosque. And, as had been the case all day, none of the locals appeared to know why.

From all this, though, Coughlan draws certain conclusions, which are not entirely in accord with his own experience on the day: "... firepower," he observes, "can become meaningless when the enemy makes skilful preparation of the ground and has no scruples about cloaking itself with the lives of the local population."

On one level, of course, he is right but he himself notes that the Taleban are reluctant to follow through their ambushes with direct fire attacks, owing to the presence of the Cobra attack helicopters. Firepower has its uses.

Furthermore, while firepower does not influence the placing of IEDs, technology certainly assists in detecting them, as does the fieldcraft of one of the Marines. Here, though, one must ask why it is that the UAVs were not of more assistance in this endeavour.

Coughlan's colleague on The Times himself reports on the utility of UAVs in detecting bomb emplacers. One wonders whether the UAVs were used merely as "top cover" once the operation had started and whether they were over the area well in advance, in an effort to detect the enemy's preparations.

One also has to note the use of hand-held detectors, which are only deployed after the first IEDs are detonated, even though their presence in this area must be assumed. And it is here that we wonder whether the Americans are much better prepared to deal with the IED than the British.

In a previous piece we drew attention to the use by the Rhodesians of the Pookie mine detection vehicle, which was used to clear the way down bush trails, ahead of food patrols. In this instance, we have the photographs of Jack Hill which shows a considerable element of open country.

The terrain maybe would not permit the use of equipment such as the Buffalo or even the Husky, but a vehicle similar to the Pookie (with the advanced technology available today) surely would be of value. As in the past, where tanks were used to shield foot soldiers advancing on the enemy, in this different type of a war, it does not seem untoward to argue that a different type of armour should be used for a different but nonetheless deadly threat.

Such technology is not always the answer and, in some cases, even dogs are being used by both the British and the Americans. These animals, though, have their limitations in a kinetic (combat) situation, not least because they become the targets. This leaves again the question as to why the military seem so keen to expose flesh and blood to the perils of IEDs when steel could do more of the job.