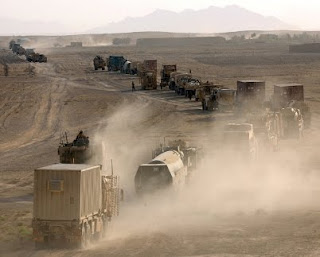 In July, we reported the shooting down of a Mi-26 as it was delivering supplies to the British military base at Sangin.

Now we learn from the MoD website that a convoy stretching for five miles and consisting of more than one hundred UK, US and Afghan National Army vehicles set off recently to resupply coalition bases in northern Helmand.

The 116-vehicle convoy, one of the biggest to ever leave Camp Bastion, was travelling a dangerous 40 miles to bases in the Sangin Valley via the outskirts of Gereshk and then off-road through open desert. It took a full day to get to the first base, with a Manoeuvre Operations Group [MOG] in Vikings acting as a screen for the convoy and clearing the path ahead (one of which took an IED hit).

The road convoy was mounted, incidentally, at a time that the US forces are increasingly relying on airlift. Since 2005, there has been an 800 percent increase in air drops – from two to three per week to seven to eight per day. In July, the USAF made 1,700 air drops over Afghanistan. That is the most since the start of the Afghan conflict, in 2001.

Given the considerable manpower required to mount extensive road convoys and the danger of attack, one would have thought that the British would be keen to use helicopters as force multipliers. But then, with 20 tons of lift capacity having been taken out, and the situation obviously very dangerous in Sangin, here we see land convoys being mounted.

Of course, this could be a coincidence. It could be that the British have so many troops that they are short of things to do with them.