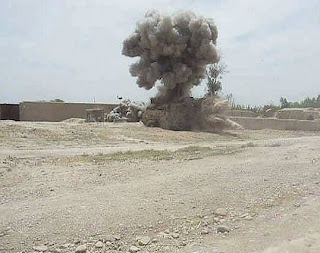 Possibly stung by Michael Yon's trenchant report on the Battle for Pharmacy Road, the MoD has rushed out its own version of the operation, currently on its website.

The Yon version is better and much more detailed, but both bring something to the table. Neither, though, is complete and – it would seem – neither tell the full story of what happened or is going on. From the joint accounts, however, a picture begins to emerge which is more than a little disturbing.

The MoD account, by way of adding missing detail, tells us that the "battle" is codenamed Operation Flint and that 200 soldiers from 2nd Battalion The Rifles are involved, together with "experts from the Joint Force Explosive Ordnance Disposal Group". We also learn that this was one of two operations, the second being the clearance, a few days later, of a pathway known as "Route Sparta", also in Sangin. In total, 37 IEDs are discovered.

Interestingly, the MoD account relies on some of Michael Yon's photographs (some of which we have reproduced), acknowledging their source – which adds a further dimension to the apparent withdrawal of Yon's embed, after the publication of his despatch. The mystery deepens.

The MoD's account of the early stages of Operation Flint very much follows the narrative set by Yon, the MoD describing Pharmacy Road as "notorious", also telling us that it had "previously" claimed the lives of five soldiers in one day. This presumably is the incident on 10 July, when five were killed in the complex ambush. 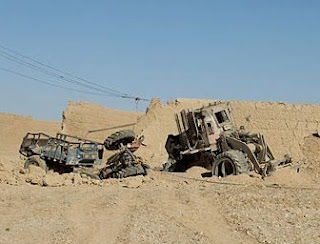 Lt Will Hignett from 2 Rifles sets the scene, telling us: "The ground in Wishtan is made up of a maze of high compound walls and narrow alleyways. It is ideal for insurgents placing IEDs in cover and a real challenge for patrols trying not to get channelled or set predictable patterns for patrolling."

As to the operation, we learn that The Rifles surrounded the "one-kilometre stretch of road to provide cover for the specialist search and bomb disposal teams" and, as Yon describes, IED after IED is uncovered.

What then gets very interesting is the way that the MoD then describes (or more accurately does not describe) the blockage caused by two blown-up vehicles, about which Yon gives us some detail and provides photographs.

According to the MoD, the clearance teams, as they moved further down the road, "discovered the wreckage of two vehicles, clearly decimated by an earlier blast." The use of the word "discovered" is, to say the very least, puzzling. They did not know they were there? We are being fed BS.

Moreover, we are led to believe that the vehicles are "decimated by an earlier blast" – i.e., a single blast. Yet, we know from Yon that one vehicle is a "Jingle" – i.e., civilian – truck. The other is, from the look of it, an armoured wheeled loader. We know it is military – Yon tells us so - and, as a JCB (Yon calls it a "scooper") is part of the recovery effort, we are told (by Yon) that "the soldier who is driving the scooper is the same driver who got blown up on Pharmacy Road."

Putting the narratives together and making our own deductions, what appears more plausible is that the civilian truck was blown up and then, subsequently, the armoured loader was despatched in an attempt to clear the wreckage, only to get itself blown up. 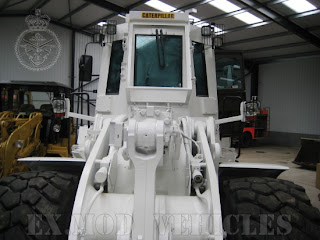 Originally, we had assumed that this vehicle was another JCB but, on close inspection of Yon's photograph (above right), it appears similar to the much larger and better-protected Caterpillar loader - the very same type that the MoD are selling off (left). This might explain why the driver survived. But it also tells us the Army has a serious problem. At 37 tons, and a back wheel missing, this is serious heavy metal creating a major obstruction. (It could, however, be a Case 721B Medium Wheeled Tractor with a Penman armoured cab – weighing in at a mere 16 metric tons.)

With the two hulks blocking the road (and then booby-trapped), it must have been these which finally closed off Pharmacy Road, effectively isolating PB Wishtan, forcing it to be re-supplied by helicopter. And, when – as Yon but not the MoD tells us – a supply helicopter was attacked by an RPG, which cannot have been long after the Mi-26 had been shot down, one surmises that helicopter flights were suspended, leaving the base cut-off and under siege.

Thus, it would appear, Operation Flint was not simply a "route clearance" operation. It was an emergency relief force to break the siege of PB Wishtan, before its supplies ran out and it was over-run. 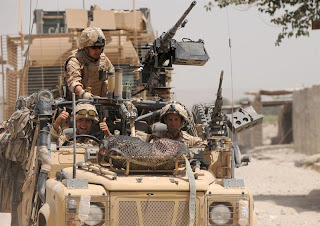 This is, effectively, borne out by the MoD itself, which tells us that, 22 hours after 2 Rifles deployed, the road was declared clear as the soldiers reached Wishtan. The rest of the night, we are then told, a "convoy resupplied Wishtan with everything from fridges to missiles." That detail is not mentioned by Yon.

That is what this convoy must have been all about. Several of the photographs show the convoy driving through Sangin market, which is the route to PB Wishtan from Jackson. We are looking at a relief convoy, breaking the siege – hence the elation of the Wimik driver.

Such is speculation, of course, but it all fits. And it explains the sensitivity of the MoD to Michael Yon's report – and its eagerness now to rush out its own version. The last thing the MoD wants is anyone to realise quite how desperate the situation really is in Sangin, with a Company base not three miles from the main FOB Jackson having been cut off by the Taleban.

That subsequently, the Taleban were effectively able to isolate FOB Jackson on election day also tells you a great deal about the security situation in Sangin, and the strength of the Taleban. Operation Flint – or at least the MoD version of it – seems to be hiding that in plain sight.

Things are perhaps now worse than even the growing casualty rate tells us. Yon got perilously close to revealing this.