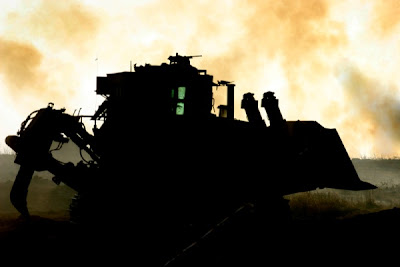 Brigadier Tim Radford, the head of British forces in Afghanistan, has said more helicopters and surveillance aircraft would make his troops "more tactically effective". But then, so would bulldozers - and they are considerably less expensive.

Interestingly, I had an e-mail from a serving US officer who had experienced the use of D-9s in Iraq. He describes how his infantry had surrounded a house in which insurgents had holed up. Instead of storming the house or calling in airpower, they whistled up the D-9. Because its armour kit had been made in Israel, the troops called it the "the Zionist Monster". Oddly enough, the Israelis call it the "Doobie" – the teddy bear.

The great advantage of the D-9, he said, was that it is very slow and noisy. You can hear it coming for miles – call it "dramatic effect". On this occasion, long before it could be seen, the growling and clanking could be heard, growing in intensity, the tension rising all the time.

When it hove into view, it trundled up to the front door of the house, impervious to AK-47 fire and RPGs. Then stopping, the driver actuated the blade lift, raising the 18-ton steel blade to its full height. He let it drop, free-fall. When the ground had stopped shaking, the insurgents came out with their hands up.

In IED country, lightly armoured Humvees would often form up in convoy behind a D-9. It took them longer to get to their destinations – but at least they got there, unharmed. Now that's "tactically effective".