A nation at war 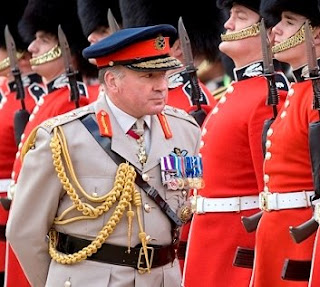 Of more than usual importance, given his high public profile and the state of flux in the Afghan campaign, the outgoing Chief of the General Staff, General Sir Richard Dannatt, gave his valedictory speech last week.

By tradition, the speech is actually written in close consultation with the successor, in this case General Sir David Richards, and his senior advisors, in order to maintain continuity and to avoid "poisoning the well" for the incomer. Thus, while Dannatt's offering has a personal component, it is also a reflection of the "Army view" of the current defence situation, of events past and of its aspirations.

It was, said Dannatt, a contribution to the defence debate and, as a shot across the bows to the media, he warns that "defence of the realm must be the stuff of considered debate and not just of catchy headlines." That debate, he adds, must be conducted in such a way that "prevents some comments being taken out of context, and becoming tomorrow's headline."

Since the main preoccupation of the media is precisely to look for the rounded "sound bite" in order to craft a catchy and preferably controversial headline – for want of which nothing gets reported – Dannatt is immediately on a loser here. And the likes of the Daily Mail do not disappoint, demonstrating that the MSM are not – and are not about to become – serious players in the defence debate.

That said, the speech is complex and full of detail and it would be impossible within the framework of the contemporary media to do it justice. In days gone by, the likes of The Times might have published the whole thing, following which there would have been weeks of discourse in the letter columns. As it is, the speech is already yesterday's news, the content largely ignored and unappreciated.

Nor indeed, by its very nature, can this blog do justice to the speech – a full review would be unreadable, and thus unread. Nevertheless, we hope it will invite an ongoing debate on the forum, and we will undoubtedly return to the issues raised.

What leaps out though is something about which we have been vaguely aware, but on which we have never really focused specifically, which explains a great deal about why we are in our present predicament.

This comes early in the speech when Dannatt takes a backwards look at the New World Order post the Cold War and Blair's concept of liberal intervention. There was, says Dannatt, a belief that this could be conducted on the basis of "Go Fast, Go First, Go Home". After all, he says, it seemed to work in Sierra Leone, East Timor, a small intervention in Macedonia, and even after 9/11 with our first experience in Kabul.

If there was anything which pre-conditioned the lack of preparedness in Iraq, perhaps it was that, where the idea was that, after the successful (from the military point of view) invasion, the troops could pack up and go home, leaving the grateful Iraqis to rebuild their country in the absence of dictator Saddam, with the assistance of civilian agencies and generous foreign aid. There was no military planning for the occupation because, under the doctrine of "Go Fast, Go First, Go Home", there was no need.

This also explains the Army obsession with FRES and the air-mobile rapid reaction forces which were very much in the vogue, these being the physical assets which were needed to implement the doctrine. The whole idea of the "long war" seems to have been discarded in favour of this new paradigm.

That Dannatt – and by no means him alone – then misread the signs is revealed by a later passage in his speech, when he declares that, "... with the Iraq campaign seeming to be progressing well in the early years, in the south at least ... Tony Blair announced in the middle of 2004 that we would return to Afghanistan in greater numbers in 2006 - a strategic move to assist our senior partner in the coalition."

"This," says Dannatt, "was a very reasonable decision at the time, but its strategic and operational consequences proved to be considerable." The "Go First, Go Fast, Go Home" as a mantra became history. The current decade has been characterised not by short, sharp interventions but by protracted campaigning in Iraq and Afghanistan.

That, effectively, is now what the current debate is about. Having been locked into a flawed "mantra" – as even Dannatt admits it was - the armed forces geared to be able to deliver on this basis, now to find that they are faced with "long wars” for which they are neither equipped nor trained – nor fully understand.

To all intents and purposes, that is the core what amounts to a confession. Dannatt, in a highly coded form, is admitting that the entire defence and political establishment got the post-Cold War paradigm wrong, and are now having to go through the process of a defence review in order to re-orientate the thinking to meet the realities of warfare, which actually have not changed that much since the Second World War. The "long war", then as now, is still the predominant mode of conflict.

To deal with that says Dannatt: "We should be under no illusion: we are at war and if we want to succeed, which we must, we must get onto a war-like footing - and as I said to the Officer Cadets being commissioned from Sandhurst last Christmas 'you enter an Army that is at war - even if not everyone in our nation realises that'".

It is certainly the case that we are a nation at war and, if any comfort can be drawn from what Dannatt says, it is perhaps that, at last, the Army seems to realise this, and may be beginning to gear up for it - the war that actually exists. Whether the MoD has quite caught up remains to be seen.