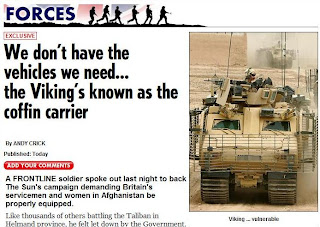 The Sun continues its coverage today, ostensibly campaigning for better equipment for "Britain's servicemen and women in Afghanistan." To promote this agenda, it focuses on the Viking, rightly pointing up its vulnerability, but then makes a case that this vehicle continues in use because the Army has "insufficient Mastiff armoured troop carriers".

Having thus reduced complex issues to a pastiche, it then firmly pins the blame on "the Government" for its alleged "failure to show true support", personalising the issue by inviting a "squaddie" to tell us that "I would like Gordon Brown to spend 48 hours with an infantry battalion on the front line."

To complete the parody, the paper then enlists the support of "Tory leader David Cameron", whose support for the "campaign" is duly reported by Conservative Home which also records, with apparent approval, shadow defence secretary Liam Fox accusing the prime minister of leaving British forces to face an uphill struggle while he plays "the invisible man of politics".

This reductio ad absurdum technique is what passes for journalism these days and ignores, as a somewhat inconvenient truth, the fact that the staunchest advocacy for the Viking resides within the military. The MoD itself was extolling its virtues in June, as it has done previously and, as late as this July, the case was still being made.

Furthermore, in a dishonest sleight of hand, the paper fails to make the obvious point, that the Viking and the Mastiff are not comparable vehicles – that the Mastiff could not perform many of the roles currently allocated to the more mobile and lighter tracked vehicle. To do so would destroy its core assertion that troops were being forced into Vikings because of the shortage of Mastiffs.

Nor, to add to the dishonesty, does it recognise that the Viking is scheduled for replacement with the better-armoured and heavier Warthog. One may have views about the utility of thus replacement, but the fact is that the government is responding to concerns about the vulnerability of the Viking, replacing it not with Mastiffs, but with another high-mobility tracked vehicle. 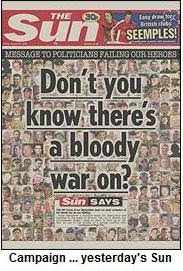 That Cameron should so easily lend his name to The Sun's dishonesty, however, reflects poorly on his political judgement. He is quoted as saying, "Yesterday's front page (pictured) was in a great British tradition which has seen our newspapers so often play a crucial part in holding politicians to account in wartime."

What we are seeing, of course, is cynical exploitation of the deaths of British service personnel in pursuit of a political agenda, without the least attempt to address the factors which are in part responsible for those deaths.

It is right and proper that newspapers should hold our politicians to account in wartime – and more so opposition politicians holding the government to account, something Cameron's defence team has transparently failed to do – but it is quite another for a paper to distort and falsify the arguments in order to pursue an attack on the government.

Here, as we have so often observed, much of the fault – such as it is – with the selection and deployment of vehicles in theatre lies with the military. Ministers do not as a rule challenge military decisions and the likes of The Sun would be (and has been) the first into the fray when it perceives political intervention in such matters.

But then to turn round and blame politicians for the decisions made by the military is perverse. More to the point, it is dangerous. The military command – cravenly hiding behind the skirts of the politicians – escapes any degree of scrutiny and, thus protected, is not held to account for its own mistakes.

By this means, there is no corrective and no deterrent. The military can continue making mistake after mistake, confident in the knowledge that the politicians will take the fall. And if Mr Cameron and his team honestly believe that by supporting this dynamic, they are in any way helping "Our Boys", then they are sadly mistaken. This they will find to their cost when they are in the hot seat.