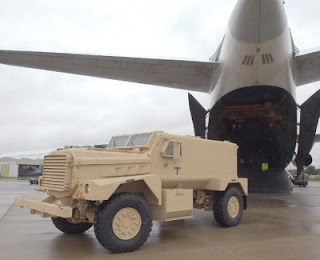 There seems to be no limit to the crass foul-ups of which the MoD is capable – but this one takes the biscuit. With British troops being torn apart by IEDs, there is a desperate need for better protected vehicles in Afghanistan, to which effect, an Urgent Operational Requirement has been raised to procure highly effective Ridgebacks which offer optimum protection.

The vehicles have been rushed into production and, so desperate was the MoD to get them into service that they even flew them from the United States, where they were built, in giant Antonov 124s (pictured above) so that they could be converted here to theatre standard with the minimum of delay (picture of converted vehicle, below right).

From here though, they were sent by sea to Dubai, where they were supposed then to be flown on to landlocked Afghanistan. But, as The Daily Telegraph and The Sun now reveal, nine (or eight) of them have been stuck in Dubai for the past month because the RAF does not have enough aircraft to fly them on to Afghanistan.

These vehicles are just the first – out of the 157 ordered – of a batch of fifty which is scheduled to have arrived in Dubai by November. But the whole delivery programme is stalled as the RAF's C17 Globemaster aircraft are committed to removing British equipment from Iraq, after the Iraqi government kicked us out. 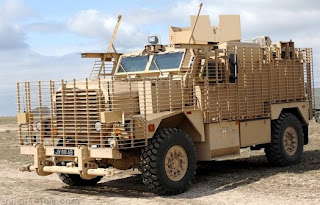 The situation has been compounded by a ruling that the equipment carried by the Ridgebacks is so secret that it has been categorised as "UK Eyes Only". This means they are not allowed to go on allied or commercial aircraft shuttling out of the airbase.

No doubt the MoD is influenced by a recent incident where Polish Wolverine armoured personnel carriers, despatched by Ukranian-owned Antonov 124s arrived in a damaged condition, with sabotage being suspected.

But, for whatever reason, this kit has been stuck on the tarmac at Al Minhad airbase outside Dubai, with their specially-trained drivers kicking their heels, frustrated because "they want to get out to Afghanistan where they know these vehicles will protect their mates."

For once, we can actually agree with Liam Fox, the shadow defence secretary, who declares: "The idea that we would have bought potentially life-saving vehicles and then not have the ability to ensure that they would get to those that need them is inexcusable."

Actually, he is being far too mild. Commercial freight aircraft are readily available and all it needs is for an armed guard to accompany every vehicle and the problem is sorted. But even that is beyond the MoD, which – it seems – would rather see men die than get its act together.

Bereft of words as I am, to do justice to this crass, malign stupidity, readers are invited to lodge their own offerings on the forum. There must be a word – or group of words – in the English vocabulary which will describe the people responsible.

UPDATE: The story is also picked up by The Daily Mail, the BBC and the Press Association. The BBC cites "security concerns" as the reason why the vehicles could not be flown on by civilian transporter. Apparently, the Ridgebacks arrived in 16 July, which was just after the Polish Wolverine incident. It is possible that we are seeing a knee-jerk reaction from the MoD.

The story has now also been published by The Times.