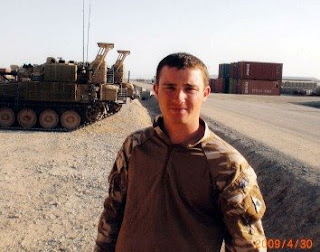 The MoD has now released the name of the latest British soldier to die in Afghanistan. He was Craftsman Anthony Lombardi of the Royal Electrical and Mechanical Engineers (REME), attached to The Light Dragoons.

In an unusually detailed report, the MoD goes on to tell us that he was killed on 4 August in Babaji, in the Lashkar Gar district of Helmand province.

He was attached as a vehicle mechanic to The Light Dragoons and was, at the time, driving a Spartan as part of an escort for a Viking supply convoy, moving between the company's two locations when the vehicle was hit by an explosion. The force of the explosion breached the hull, killing him instantly.

This appears, on the face of it, almost a re-run of the circumstances surrounding Lt-Col Thorneloe's death. He too was with a Viking supply convoy, only that time it was the Viking that got hit rather than a Spartan.

Had it been a Viking this time, and/or a high ranking officer, the media might have taken some more notice. As it stands though, very few media reports bother to mention the vehicle type. It is not one with which they are familiar.

The details, however, do beg a series of questions. One would like to know why a lightly armoured vehicle like the Spartan – which is an armoured personnel carrier – was being used as an "escort" for the more heavily armed and armoured Vikings.

Even then, as the Thorneloe incident – and others – demonstrated, the Vikings are highly vulnerable when used for routine tasks such as supply convoys, where they are unable to exploit their mobility, which is supposed to confer their protection.

The same also applies to the Spartan and it was only fate that this was the vehicle targeted rather than a Viking.

One would also like to know whether the convoy route was such that the high mobility of these tracked vehicles was really necessary, or whether a better protected vehicle – like the Mastiff or the Ridgeback – could have been used.

That, of course, we will never be told, especially as it now transpires that the Ridgebacks in Dubai were never intended for immediate use. This comes over from the BBC report and has been independently confirmed.

Although Ridgebacks are available in small numbers, the Army has no intention of deploying them until there are enough to equip the brigade group, with fully trained drivers and all the infrastructure in place.

This, the Army argues, is necessary to save lives, as fielding new kit prematurely – they say – presents its own hazards. Thus, the nine Ridgebacks that have been (or are being) "rushed" to Camp Bastion will stay there unused until the new roulement arrives in October and is ready for action.

The Army, therefore, not the MoD, is the blockage, rather confounding our earlier story. The Ridgebacks were left in Dubai because there was no hurry, as there was no intention to use them yet.

It does seem extraordinary that the Army itself should reject life-saving kit and, if it could be shown that Craftsman Lombardi could have been saved, had he been riding in a Ridgeback – and that such a vehicle could have been used – then the Army case for delayed deployment looks pretty thin.

What is salutary about this whole affair, however, is the willingness of myself and others to leap in on the basis of very limited information, and condemn both the politicians and the MoD – when it is now clear that the delay in deployment is a military decision, taken for what the Army believes are sound operational reasons.

Arguably, the Army is wrong. It is displaying a peace-time preference for having everything neat and tidy, and properly organised, instead of the untidy and more difficult to manage "trickle" deployment, releasing the vehicles to theatre as they (and their drivers) became ready.

Tidiness is not a luxury the military can afford in wartime. Imagine, for instance, in wartime Malta when a decision was made to replace the outclassed Hurricanes with Spitfires. New machines were rushed in to fill the gaps, with the two types operating side-by-side for a period.

Imagine what would have happened if replacements had been delayed until a "big bang" switch-over was organised. The battle would have been lost.

It will take a great deal of convincing for me to believe that the Army is right in its current policy. If men could be alive today, but were killed for want of better equipment, then there should be a reckoning.