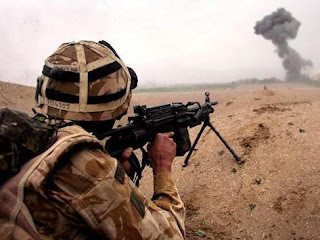 McChrystal's views are covered in diverse media sources, not least The Daily Telegraph and The Guardian, the latter announcing that McChrystal is to liken the US military to a bull charging at matador, when he delivers his strategic appraisal to the US Central Command on Monday.

A more useful analysis, however, can be found in The Washington Post where Anthony H. Cordesman holds forth. He tells us that the United States cannot win the war in Afghanistan in the next three months. Any form of even limited victory will take years of further effort, he says. It can, however, easily lose the war.

While serving on the assessment group that advised McChrystal on strategy, he did not see any simple paths to victory but he did see all too clearly why the war is being lost.

The most critical reason, he believes, has been resources. Between 2002 and 2008, Cordesman argues that the US has never provided the forces, money or leadership necessary to win, effectively wasting more than half a decade. A power vacuum has been left in most of Afghanistan that the Taleban and other jihadist insurgents could exploit and occupy. Washington did not respond when the US Embassy team in Kabul requested more resources.

Interestingly, Cordesman does not confine his complaints just to a shortage of military force. He gives equal prominence to money and, crucially, leadership. He is also particularly scathing over the failure of the US to develop an integrated civil-military plan or operational effort even within the US team in Afghanistan. Far too much of the aid effort, he asserts, has been focused on failed development programmes.

In terms of additional troops, "almost every expert on the scene has talked about figures equivalent to three to eight more brigade combat teams - with nominal manning levels that could range from 2,300 to 5,000 personnel each - although much of that manpower will go to developing Afghan forces that must nearly double in size, become full partners rather than tools, and slowly take over from U.S. and NATO forces."

Similarly, says Cordesman, a significant number of such US reinforcements will have to assist in providing a mix of capabilities in security, governance, rule of law and aid. US forces need to "hold" and keep the Afghan population secure, and "build" enough secure local governance and economic activity to give Afghans reason to trust their government and allied forces.

They must, he says, build the provincial, district and local government capabilities that the Kabul government cannot and will not build for them. No outcome of the recent presidential election can make up for the critical flaws in a grossly overcentralized government that is corrupt, is often a tool of power brokers and narco-traffickers, and lacks basic capacity in virtually every ministry.

And therein lies much of the problem. Cordesman tells us that "strong elements in the White House, State Department and other agencies seem determined to ignore these realities."

They are pressuring the president to direct ambassador Eikenberry and McChrystal to come to Washington to present a broad set of strategic concepts rather than specific requests for troops, more civilians, money and an integrated civil-military plan for action. They are pushing to prevent a fully integrated civil-military effort, and to avoid giving Eikenberry and McChrystal all the authority they need to try to force more unity of effort from allied forces and the UN-led aid effort.

Much as we have argued that the war in Afghanistan will not be lost in the deserts of Helmand, but in the corridors of Whitehall, similarly Cordesman is making the case that the war will be lost in Washington.

President Obama, he argues, will be as much a failed wartime president as George W. Bush. He may succeed in lowering the political, military and financial profile of the war for up to a year, but in the process he will squander our last hope of winning. We have a reasonable chance of victory if we properly outfit and empower our new team in Afghanistan; we face certain defeat if we do not.