A question of strategy 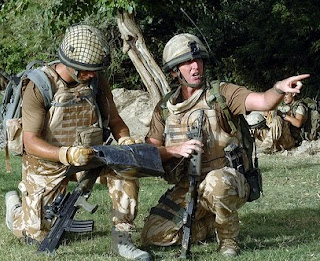 No one can dispute the courage and tenacity of Doug Beattie (pictured – right) and, with the knowledge derived from first-hand experience of fighting in Afghanistan – for which he was awarded the Military Cross - he puts a powerful argument as to why we must finish the job in Afghanistan.

Under the title "a question of stamina", it is addressed to those who are "clamouring for us to leave the country to its fate" – including this blog. His line is to ask us to "consider exactly what that fate might be."

The argument is that which could – and perhaps should have – been put by our own politicians and our military. In the latter department, all Jock Stirrup, our current CDS, seems to be able to manage is the rather lame plea that the service personnel who have sacrificed so much in Afghanistan "look to us to seize the opportunities they've created; to deliver on the issues of will, commitment and Afghan political progress that are now crucial to success."

"We owe them and their families no less," declares Stirrup, oblivious to the fact that there is only one acceptable reason for our military presence in Afghanistan – that it is in our national interest - a case he fails to make convincingly.

The Beattie line though, rests on a vision of Hell, our withdrawal leading to a collapse of Afghanistan, a takeover by the Taleban with murder and mayhem following, with the subsequent destabilisation of the region and the collapse of Nato.

Thus does the gallant (no irony – he really is gallant) Captain assert that there will undoubtedly be continued casualties among British troops, but the damning reality is that things could get far worse if we leave. Not for us perhaps, at least not initially, but for so many others.

"Now the fight has started we need to finish it," he enjoins us. "We have promised to help create something better and must deliver it. We just have to have the stamina and courage, both physical and moral to do so."

Whether we have either is debatable, especially in the context of the latest opinion poll which has two-thirds of respondents opposing Britain's continued deployment of troops in Afghanistan.

But if it was just a question of "stamina and courage", then perhaps the long-term maintenance of our military mission might be possible. Traditionally, these are the great strengths of the British people and it cannot be beyond the capabilities of even our current, dire breed of politicians to press the right "buttons" and rally the nation behind this cause.

However, what Beattie does not mention are two other issues: strategy and capabilities. He may have an earnest and well-founded desire for us to finish the job, but he does not address whether we have an effective strategy that would enable us to do so and, if we had, whether we have the capabilities to implement that strategy.

Thus, while we have painted for us an Armageddon scenario, precipitated by our immediate and voluntary withdrawal, the alternative could just as well be the same thing, only delivered over a more prolonged timetable, as we are forced to concede defeat (however much it will be disguised). And, if the choice is between a high-speed crash and a slow-motion train wreck, it is not unreasonable to argue that we might just as well get it over and done with.

Such a sentiment can only be reinforced by Jock Stirrup's claim that "the strategy in Afghanistan is the right one." This is a consistent refrain from this man, an officer who also admits to failures in communication and to having been "smug and complacent" about prosecuting counter-insurgency warfare.

Manifestly, the strategy is not right. Equally – and self-evidently – tactics are not right and the equipment is not up to scratch. The political and economic environments are unravelling as we speak, while Gordon Brown rests on the wholly unrealistic prospect of expanding rapidly the Afghan Army, in a bid to restore what US Joint Chief of Staff Admiral Mullen openly admits is a "serious and deteriorating" situation.

Thus, while we can acknowledge Beattie's warnings and concerns, as long as the likes of Stirrup are offering soothing, patronising claims that our strategy is "the right one", we know there is no hope. When his likes climb down off their gilded pedestals and acknowledge that which we all know, that we have serious problems, for which solutions have yet to be devised, then there can be some confidence that we might, possibly, be in a position where we can devise a workable strategy.

For want of that, there is very little separating "stamina and courage" from mulish obstinacy and blind stupidity.