Why we are losing 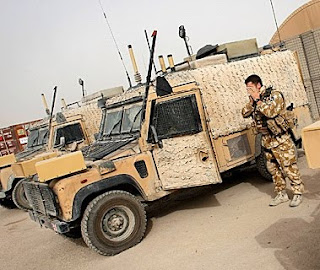 Anthony Loyd in Sangin reports for The Times on the latest fatal attack, which killed three soldiers and injured many more. He writes as follows:

As the dust cleared around them, revealing the terribly injured body of one of their comrades, the fusiliers knew that the horror might have only just begun.

Three of their number had died on Thursday in the same green zone south of Sangin — killed by a secondary device that exploded among soldiers trying to rescue the wounded from the first blast.

Shortly after first light on Sunday, the same was about to happen again, killing three more British soldiers and taking the death toll to 204.

As the troops of 3 Platoon, A Company, 2 Rifles battlegroup carried their casualty through reeds on the bank of the Helmand River towards ground that was clear enough for a medical helicopter to land upon, another blast ripped through them.

"I was blown on to my backside," said Sergeant-Major Pete Burney. "I thought, 'That's me then' but as I picked myself up I saw I hadn't a scratch. Then I realised we were among a belt of IEDs [improvised explosive devices]."

To his right he could see a medic, a woman who seconds earlier had been attempting to resuscitate the first casualty, but who had been blown past him and lay wounded on the ground. Another fusilier and a Royal Military Police corporal were injured. A fusilier lay dead among more IEDs.

The other incident to which Loyd refers happened on 13 August. But then there was the incident on 10 July when five died, again through a combination of a primary bomb and a secondary set to kill members of the rescue party.

To paraphrase Lady Bracknell, once may be regarded as a misfortune; twice looks like carelessness. Three times?

But we had exactly the same dynamic with Snatch Land Rovers. On 29 May 2005, L/Cpl Brackenbury is killed in a Snatch by a type of bomb then new to the British sector – the explosively formed penetrator (EFP) – against which the vehicle was defenceless. Three others are injured.

Then, on 6 June, an EFP "daisy chain" is discovered intact and successfully defused. It is taken away for forensic analysis, from which the Army confirms with no room for doubt that Snatch Land Rovers offer no protection at all to this type of device.

So what does the Army do? On 15 July it sends another Snatch patrol out into the same general area where the device is known to be used. Three soldiers are killed and two more injured. And then the Army does it again and again and again.

We are led to believe that the Army is manned by professionals – soldiers who know what they are doing. We can criticise the politicians freely, but not our "Brave Boys" who put their lives on the line.

So which politician was it that decided to send a foot patrol out into an environment where twice previously soldiers had encountered complex, multiple IED ambushes and experienced multiple casualties?

Or could we possibly surmise that this was an "operational" decision, just like the decisions to deploy Snatches into a territory where weapons were being deployed which rendered them defenceless?

And just how many times do soldiers have to walk into such traps before it dawns on someone that this is not a terribly good idea?

Incidentally, it was on 10 March 2007 that Anthony Loyd, soldier turned photographer and war correspondent, argued: "for once" an Afghan war is winnable, declaring that, "the tide is turning against the Taleban".

Some tide ... some Taleban.