The battle for Pharmacy Road 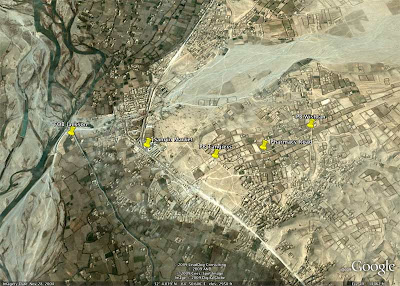 We have written a great deal of the situation in Sangin, deploring the growing toll of casualties in that town, the brunt of which are being taken by the 2 Rifles Battlegroup under the command of Lt-Col Rob Thomson.

Their headquarters are at Forward Operating Base (FOB) Jackson near the banks of the Helmand River just outside Sangin town, in the so-called "green zone", the lush area of vegetation fed by the river waters.

Embedded with 2 Rifles – until yesterday when his permission to remain was withdrawn by the MoD after he had posted this report – Michael Yon was able to describe in detail one small action, which I have dubbed the "battle for Pharmacy Road", the narrative here culled from Yon's much longer report.

The unpaved Pharmacy Road, flanked by 15ft-high baked mud walls forming the boundaries to sizeable compounds, starts about two miles to the south east of FOB Jackson - a route which passes through Sangin market. It runs east north-east connecting two secondary bases, about a mile apart (see above - note, this is not oriented north/south). At the western end is Patrol Base (PB) Tangiers manned by the Afghan National Army while, at the eastern extremity is PB Wishtan, named after the locality, occupied by C Company 2 Rifles.

Pharmacy Road, however, has effectively been closed by enemy harassment, including a blockage caused by two blown-up vehicles (a "jingle truck" and a British Army armoured JCB). IEDs are planted in broad daylight and the enemy chisels small firing holes through the walls and fires bullets down the tight spaces and alleyways.

Resupply and troop movements, therefore, had to be performed by helicopter, even though a patrol could walk from Jackson to Wishtan in an hour and straight driving would only take fifteen minutes. With the shortage of helicopters (and the fact that an RPG was recently fired at a helicopter as it lifted out of PB Wishtan), closure of the road increased enemy freedom of movement while decreasing that of the British and Afghan forces.

The British soldiers of 2 Rifles were thus given a mission: clear and hold. The task is not easy. With no direct line of sight from one end of the road to the other, and a network of narrow alleys between compounds, giving ambush opportunities to the enemy, the troops will be hemmed in by the high walls.

Snipers are of little use because they can neither see nor shoot through the walls, which are so robust that even 30mm cannon rounds fired from aircraft will not penetrate. A 500lb bomb exploding in the middle of a compound will leave the walls standing. And there is no commanding terrain other than the air.

The mission began under cover of darkness, the troops equipped with night vision goggles and led by a soldier with a sniffer dog.

"We set off down the market road," Yon writes. Then, in an oblique reference to his MoD "minders" – who were subsequently to pull the plug - he adds: "Some folks believe such reports are 'security violations', as if the thousands of people living here do not know exactly where the bases are, or do not know exactly where we came from and went to. Operations take place here every day. Civilians are everywhere."

Despite being observed by so many civilians, the troops, Yon still with them, reach PB Tangiers with no dramas. Some Afghan soldiers were on guard there, while others seemed comatose.

With the troops is Cpl Mark "Axle" Foley, the JTAC who controls air strikes. He is allocated support from A-10s but about 0314, as they approach, still about 40 miles out, they are called away for a TIC (troops in contact) somewhere in South Helmand. The men bed down to sleep.

It is not until nearly half past five in the morning that ordnance clearance (EOD) teams start moving down the road, clearing IEDs with controlled explosions – dealing with six in the space of an hour. They have a soldier with a sniffer dog with them. This is not entirely successful, leading his handler at one stage over an undetected pressure-activated IED.

With one stretch "cleared" - there have been many instances where soldiers heve been blown up by ground that has just been cleared, so cleared is more like "cleared" - Lt-Col Rob Thomson leads some of his men to check the progress in clearing some of the most dangerous ground, where the blown-up vehicles are blocking the road.

About 200lb of plastic explosive is used to make a breach. This also brings down electrical wires so the breach is widened with an armoured JCB, to allow a heavy truck through into the compound, which is used to winch the wires clear. Then the wrecks are dragged into the compound and the way is now clear for the EOD teams to continue.

That night, however, the troops stay in the compound, the aim being to build a permanently manned observation post halfway down the road. Yon sleeps while soldiers from 2 Rifles and the engineers work all night erecting the sanger (guard post).

As the sun was rising on the second day, Pharmacy Road had been cleared and the sanger had been built. Yon and most of the troops headed back to FOB Jackson. Back at the base, an explosion shook the room. Word came that a local person was pulling parts from one of the vehicles that were dragged off Pharmacy Road. He encountered a Taleban booby-trap and he had been killed.

EOD had not cleared the vehicles of booby-traps; the two vehicles had merely been pulled off the road. Next day another local was killed on a parallel road that he thought the British had cleared. It had not. The Taleban blows up a lot of local people in Sangin, writes Yon.

The mission was an obvious success. It was surprising, Yon adds, that we endured no fatalities or serious injuries. The mission was well-executed and since many of the soldiers have substantial combat experience from Iraq and Afghanistan, major dramas were averted.

Although at least one IED has been placed on the road since, C Company and the ANA are now regularly patrolling and the freedom of movement has resumed. This is a brutal fight. Since that mission, eight more British soldiers and two interpreters have been killed in the area. That's ten KIA plus the wounded. The soldiers keep going.