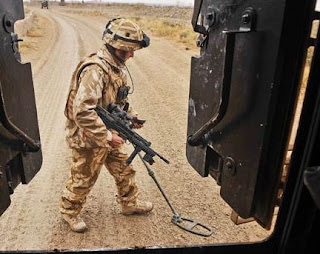 "I find it so distressing to hear lavish praise being heaped upon the procurement of vehicles that are potential death-traps and to listen later to expressions of condolence to the families of those who have perished in them."

So said Ann Winterton in a debate in the House of Commons on 4 June this year, but her distress might easily apply to the expressions so freely offered (and repeated) every time troops are killed.

"Fine words butter no parsnips" – a phrase which seems to have its origins in antiquity - seems an appropriate response to these gushing outpourings, so easily trotted out every time a soldier is killed.

The soldiers, we are told, died as a result of an explosion that happened whilst on a routine foot patrol, not connected to election security, near Sangin, northern Helmand province, on the morning of Thursday 20 August 2009.

Yet the "great sadness" phrase is just words, pulled off from a standard MoD template, to be pasted in against the details of whichever incident is then current.

Even now, the media team are rushing around collecting statements from the colleagues and relatives of the deceased, to paste into the increasingly lengthy eulogies that are in the process of being written, but they too will be just words. They butter no parsnips – they do not bring the dead back to life and nor do they prevent troops yet to die from being killed.

Furthermore, built into the brief announcement from the MoD is a "lie" – a circumlocution, if one wants to be charitable. The incident happened while the troops were "on a routine foot patrol" says the MoD.

We saw this "routine patrol" lie in November 2006 when the MoD described the deaths of four military personnel on the Shatt al-Arab waterway in Iraq in terms of them being engaged in "a routine boat patrol".

In fact, they were in a "water taxi", sent to their deaths, wholly unprotected when it was thought that this was the safest way of transporting personnel between bases. It certainly was "routine" – and that is what killed them – but it certainly was not a "patrol". These were lambs led to the slaughter.

Nor indeed was this current incident a "routine patrol" – at least, not wholly. In fact, according to Thomas Harding of The Daily Telegraph, it was not one incident, but three. The first may have arisen from such an event, although the whole idea of a "routine" is an anathema in counter-insurgency. Routines kill, as they did on the Shatt al-Arab.

The first soldier, writes Harding, from the 3rd Bn The Yorkshire Regiment, a unit sent out as emergency reinforcements to Afghanistan last month after the very high casualty rate this summer, was killed instantly after his foot patrol was targeted.

The second soldier, from 2nd Bn The Rifles, died as a force was sent out to retrieve the body of their dead colleague. Then, as the remainder of the force attempted to evacuate both fatalities a third device went off. Two soldiers were wounded in addition to the two killed in the attack, bringing the total number of British fatalities in Afghanistan to 206.

These facts immediately elevate the incident into a different league. We note that the location is what we have called the mincer of Sangin and that these two deaths bring the total in this area to 57, and this year to 22, with nineteen of them arising from IEDs.

With the grand total of 206 fatalities now recorded, an estimated 176 of these are KIA, which has Sangin and its immediate environs accounting for nearly a third of all deaths in action (32.4 percent).

That, in itself, is remarkable, as the area is often cited as one of the government's key targets for its "co-ordinated delivery of military and civil effect". Its aim has been "to provide a secure environment to allow stabilisation activity to take place", an aim in which it seems singularly to have failed, despite numerous intensive operations - although the MoD claims otherwise, one observer "noting" that ISAF is making "small baby steps" that, if continued, will soon pick up greater pace and confidence.

But what has marked out the most recent casualties – and magnified the rate of attrition – is the Taleban tactic of employing multiple IEDs in complex traps, with secondary devices aimed at killing rescue parties when they come to the aid of those caught in the primary blast.

With this current incident, this is the fourth time in the Sangin area since 10 July that troops have been caught out with fatal effect. That is not to say that similar tactics are not being used by the Taleban elsewhere – they are. Earlier this month we saw a soldier killed near Gereshk (although not so very far from Sangin) when he sought to recover an Afghan soldier's body. Then there was the incident in December 2008 when a soldier was killed after a complex ambush on a Viking near Lashkar Gah.

From other reports, though, it would appear that complex IED ambushes are now theatre-wide, these also having been experienced by USMC patrols further south in Garmsir.

Nor indeed is the slaughter confined to British troops. While we have lost 15 so far this month, the total losses for all coalition forces have now reached 50, not so very far short of last month's rate, when the total reached 76.

Public (and therefore political) acceptance of this continued toll of fatalities – which admittedly by contrast with previous campaigns is relatively modest – requires us to trust that the Army knows what it is doing, and the casualties are a necessary and unavoidable consequence of war, all in the context of the military making progress towards achieving its aims.

Sensitised by the saga of the Snatch Land Rover, however, and many other subsequent episodes where it has been demonstrated that the military (with or without the dereliction of the MoD – and it is difficult to assess where the responsibility lies) has been somewhat cavalier in its responsibilities, we are less than convinced that the Army has a grip on the situation.

Looking down from this end of the telescope – lacking the context and broader appreciation of the campaign in Helmand – all we see is a progression of casualties, some of which are evidently caused by the same Taleban tactic, for which the Army seems to have no obvious counter.

The Army response (and that of so many of its fellow travellers) is to retreat behind the wall of OPSEC (operational security) oblivious to the very obvious fact that the enemy clearly knows a great deal about its operations, with so many others directing sneering condescension at those who have the temerity to question or even doubt the wisdom and professionalism of "Our Brave Boys".

So often are our soldiers cast as "heroes" that there is virtually a cultural taboo against offering even the mildest criticism of soldiers, even though there is nothing particularly heroic about being blown apart by a hidden IED, or having limbs ripped apart. In fact, it is a squalid, miserable way to go.

Somehow, though, the military – or perhaps the politicians – are going to have to come to terms with the legitimate, but often overstated demands of OPSEC, and the need to provide enough information to assure its critics that the Army is responding effectively to the different threats in theatre, and is taking them seriously.

Fine words are no longer good enough – if they ever were.