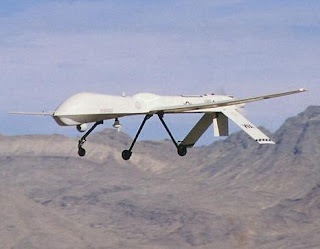 It was in December 2006 that we published our own "shopping list" for new equipment to fight the insurgencies in Iraq and Afghanistan, much of which addressed the urgent need for better surveillance capabilities.

To give him his due, on 27 February 2007 Chris Bryant, who had then recently been to Basra Air Station, asked in Parliament what was to be done to ensure that we have better ISTAR — intelligence, surveillance, target acquisition and reconnaissance.

On 21 March 2007, we offered "cheap and cheerful" options for achieving improved surveillance. Like Bryant, our comments went unreported.

Then, on 22 April 2008, we were writing about Robert Gates, the US defence secretary, observing how difficult it is to get the USAF "old guard" to change its ways, and address the realities of fighting counter-insurgency campaigns in Iraq and Afghanistan.

He was addressing officers at the Air University at Maxwell Air Force Base, telling them that the US military needed more UAVs and equipment to collect intelligence and conduct surveillance in Iraq despite a big boost in those capabilities since 2001.

On 5 August 2008, I was writing of complaints, voiced in The Daily Telegraph that the MoD has been "slow to appreciate' potential of drone aircraft in Iraq and Afghanistan". To that, I ventured that we would say, in a voice laden with irony, "You don't say!" We might also add the question, "what took you so long to notice?"

However, it was on 4 December 2007 that I had written, in the specific context of securing adequate surveillance assets: "Until and unless we start getting grown-up discussions ... we are going to get nowhere."

There has been very little in the way of grown-up discussions since, certainly not in the British media, but now we get The Daily Telegraph picking up on Gen Dannatt's call for 24 hour surveillance in Afghanistan.

This follows his "shopping list" of more equipment he delivered last month, and we are now told that his demand for more surveillance systems is his most explicit yet. Sir Richard wants an increase in resources for Britain’s Intelligence, Surveillance, Target Acquisition, and Reconnaissance (ISTAR) programme, "a network of planes and unmanned drones that collect images and listen in on enemy forces."

As the same time, a document submitted to the Commons defence committee, has the MoD admitting that it does not have enough ISTAR specialists. "Manning shortfalls in these groups vary widely and may apply at different levels within a trade group. The ones of particular concern from the point of view of current operations are linguists, human intelligence operators, image analysts and Royal Engineer (geographic) and manning shortfalls in these areas range from 10 per cent up to around 40 per cent."

Then, in evidence to the committee, senior military officers expressed concern about the shortage of ISTAR specialists in Afghanistan. Brigadier Kevin Abraham, Director Joint Capability at the MoD described the staff shortages as "a serious challenge" to ISTAR operations.

With the scene thus set for him, Liam Fox makes a foray into what for him is virgin territory. Despite having had hundreds of opportunities to raise the issue, in Parliament and elsewhere, only now does he finally observe that: "Good ISTAR capability, in addition to more helicopters, earning the trust of the local population and increased armour, is the best way to counter the IED threat. If there is a shortage of this capability, the Government must do everything it can to fill that gap."

He, the media, the military and, in particular, Gen Sir Richard Dannatt, could have been saying these things three years ago. They weren't. But, in his own intervention, David Cameron accuses ministers – and only ministers - of paying inadequate attention to the Afghan operation, saying the government must show more "focus" on the mission there. His remarks could, however, equally be addressed to his own defence team and also to the MoD and military.

Speaking personally – we are allowed to do this occasionally – I am getting tired of all this posturing. I take a great deal of flak from all and sundry, about not "being there", about my lack of military experience, about being "ill-informed" – and all the rest of the crap.

Then, in that November, I was complaining that "all we hear is silence". Now, all we hear is complaints from the very people whose voices we should then have been hearing. I think that I'm more than a little justified in saying they're a bit bloody late.