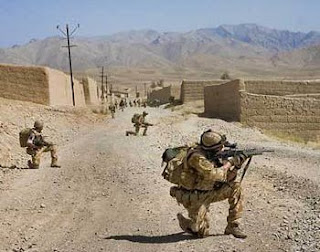 The title comes from a moving and informative piece in The Independent today, described as "the first ever unauthorised dispatch from an officer on the frontline".

This is a young Captain offering "a brutally honest account of life in Afghanistan, revealing the pain of losing comrades, the frustration at the lack of equipment, and the sense that the conflict seems unending and, at times, unwinnable."

"Shotvarfet" is taken from the end of the piece where the anonymous Captain cites a scene near the end of Pat Barker's novel The Ghost Road, set at the end of the First World War, in which a seriously injured soldier lies in hospital, gradually dying.

The soldier regains consciousness but due to his injuries can only slur a sentence together, which he keeps repeating. His family agonisingly try to decipher what he might be saying, which sounds like "shotvarfet, shotvarfet". His doctor realises what he is trying to say and translates: "He's saying, 'It's not worth it'." The man's father, a retired Army major, in grief blurts out: "Oh, it is worth it, it is."

This incredibly powerful passage, says our Captain, goes some way to articulating our response to this conflict. We seem to know and say that it is not worth it, whilst instinctively reacting and saying that it is worth it – it has to be worth it. If I am honest, I do not know what I think about it all conclusively; my reasoning is lost in the storm of media, opinions, analysis that are at play here.

However, he says, I know that no matter how hard I try to see through the clutter of opinions and utter something of my own in order to explain or justify what I'm involved in, I just cannot shake off that nagging, repetitive voice in my head that says "shotvarfet, shotvarfet".

There is much, much more to this piece, which gives a unique insight into the conduct of the campaign in Afghanistan and the thinking behind it. We'll look at some the issues raised in the next post.