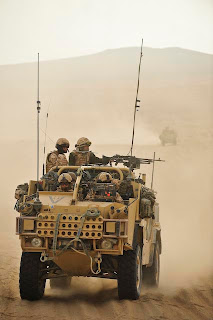 After the first inquest into a Jackal casualty, two weeks ago, with the vehicle escaping any serious criticism, the military have managed to hold the line through the second, the vehicle again emerging with no censure of any significance.

This was the inquest into the deaths of Marines Neil Dunstan, from Dorset, and Robert McKibben, from County Mayo, held at Trowbridge, in Wiltshire yesterday. The pair were killed, together with an Afghani interpreter, on 12 November 2008 in the Garmsir District. At the time, they were shadowing a logistics team across the "moonscape" type terrain, deliberately avoiding main paths, along with soldiers from the Afghan National Security Forces. Another Marine was injured.

Crucial facts to emerge were that the mission was considered "low risk", to the extent that the crew were not wearing helmets, and that the off-road capability of the vehicle had been exploited to keep away from tracks, "which were often mined." But at a crossing, the vehicle had trigged a powerful explosion initiated by a pressure plate. The bomb used was estimated at 25kg of "homemade explosives", which had turned the vehicle upside down. The surviving soldier had to be pulled from underneath it.

The incident, therefore, has the hallmarks of a classic ambush, relying on the vehicle having to negotiate a "vulnerable point" where the trap was laid. Confounding the claims of the terrorists using "bigger bombs" this device, like the first, was of a relatively modest size – possibly a drum of fertiliser – yet it managed to overturn the flat-bottomed vehicle.

Despite the implications of these deaths, the field has been largely vacated by the national media, reporting has been left to the local media. The Bournemouth Echo making the running, but with the Irish media also publishing reports because of the local interest.

A regional BBC TV report retailed the coroner questioning the patrol commander Capt Charles Breach as to "why Jackals were used for reconnaissance work rather than the more protected Warrior vehicles."

Breach had "explained" that, "to gather intelligence, his men needed to interact with local people and they couldn’t do that if they were sitting behind bullet-proof glass". He had confidence in the Jackal and it was a good vehicle for reconnaissance work.

With that, the Coroner, David Ridley, having heard evidence that the lack of protective helmets would not have saved the men, recorded the verdict of unlawful killing. "On the basis that this was a device left by the enemy forces and that if any charge were levelled at any individual, it would be murder," he said.

Even though eleven British soldiers, and at least one Afghani, have now been killed in Jackals – more than the 10 killed in Snatch Land Rovers in Afghanistan, clearly there are insufficient body bags for the national media to take an interest. Even The Sun, which had two weeks ago reported on the views of "Brave Kate", the girlfriend of Neil Dunstan, seems to have been uninterested in the verdict.

Thus the mantra holds – the need to "interact" trumps protection. All is well in the world as Captain Breach has "confidence in the Jackal", while Marines Dunstan and McKibben - and the Afghani translator - were not around to ask.