They were in a Mastiff 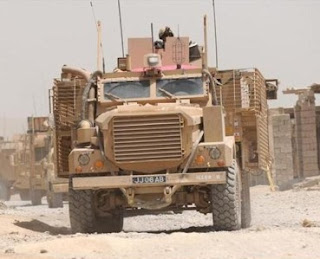 In The Observer today we find published extracts from the diary of a soldier engaged in Operation Panther's Claw. As well as recording his experiences, the account provides a valuable insight into the thinking of one soldier as he grappled with the news of colleagues terribly injured and killed by the growing menace of IEDs.

He himself is shot in the chest and has to be evacuated, but he also finds himself twice in a Viking struck by IEDs. On these occasions, all troops inside survived.

Clearly conscious of the IED threat (he could hardly be otherwise) he asks why the Army does not have more sniffer dogs, suggesting that finding IEDs would be "a lot easier with a furry friend running about and a lot more lives would be saved." He observes that, since arriving, he has not seen one dog.

The pertinence of this observation is reinforced when he learns that another soldier has been killed in an explosion while searching for IEDs. The soldier also observes that, "We are so spread out and overstretched on the ground and it means the Taliban are taking the piss. They can lay these IEDs at fucking will. We are not there at the moment to put out ops or sniper over-watch and the Taliban know it."

Several points emerge from these observations. Firstly, as one might expect – this is not a criticism – the man is interpreting what he sees from his own very narrow perspective.

Thus, while he is clearly aware of the utility of sniffer dogs, he has not necessarily thought the issue through – that in a "kinetic" environment (which this certainly was) dogs and their handlers are extremely vulnerable and tend to be targeted by the Taleban.

As to "ops or sniper over-watch" to counter the IED emplacers, that is an infantry response but, in the context of this overall operation, we have already observed that this was an ideal role for UAVs and, in this piece noted:

In that Panther's Claw is a "deliberate operation" – i.e., one that was planned and executed in an area of choice - the fact that the Taleban had laced the area with IEDs could perhaps have been pre-empted. Not least, troops could have been provided with far more knowledge of their locations and extent than they seem to have been.

Our soldier also writes of being told that a checkpoint spotted "two males lying prone and digging on the track where we keep getting hit." In this instance, he reports with disgust, "...we only fired warning shots at them. Another wasted opportunity." Indeed.

In other instances, we have seen reports of the lethal effect on bomb emplacers of the combination of UAV surveillance and airpower and one wonders why such assets could not have been employed here.

But in another diary entry, we read this appalling observation:

We have spent all that money on a new bomb-proofish vehicle but you've still got four blokes with metal detectors out at the front of it and one commanding them. Sometimes I just don't get it. We need to invest in better bomb detection equipment and get more dogs out here. Surely there is something that we can use to trigger bombs off early?

And, of course, there is. Earlier, we reported on these self-same "primitive" British mine/IED clearance methods, compared with their US counterparts, noting that the USMC were equipped with a 10-vehicle clearance team that included a vehicle equipped with a mine roller, pushed ahead to detonate pressure-pad actuated mines and IEDS, a Husky mine detection vehicle and a number of MRAPs, all manned by specialist combat engineers.

Later, we then noted how the British deficiency had been made up by borrowing "an American anti-explosive unit, Task Force Thor, with specialised vehicles, sweeping the road ahead for the ever-present threat of bombs."

The soldier's comment, where he calls for investment in such kit, displays his own ignorance. The MoD has invested in some of this kit, announced last October as "Project Talisman". A better question, therefore, might have been why the investment was made so late – a question which the media could be asking, but have never bothered with.

The results of this lack of investment have all too often been tragic, but on one occasion the soldier is able to report better news. He is told that two casualties had been flown in, their vehicle hit by a 40kg IED. One "had a bad arm" and that other "his vertebrae done". "They were in a Mastiff," writes our soldier, "that's why they survived. They were both very lucky. The Mastiffs are worth their weight in gold."

Compare and contrast this with the experience of Pte Richard "Hunty" Hunt, as recorded by Sean Rayment in The Sunday Times. As the driver of a Warrior, he was protected by several tons of metal but, as it trundled along a river bed, en route to the main British base at Musa Qala, his vehicle, the 11th in a convoy of 30, hit an IED.

Such was the force of the blast that Pte Hunt's head was smashed against the side of the Warrior. Even though he was wearing a helmet, the impact caused immediate brain damage. Close to death, he was taken to the field hospital at Camp Bastion, where surgeons fought to keep him alive long enough so that he could be flown home to spend his final hours with his family.

Our soldier, of course, was luckier. With his chest wound, he was flown home on a medical flight. There are, he writes, "blokes with no legs on board." He sits next to one lad who is completely deaf. Another tells him he has been hit with IEDs four times while inside a Viking and he's just had enough, too frayed to get inside another vehicle.

It would be facile to suggest that he should have been in a Mastiff, and that mine clearance/detection teams should have preceded him. But the diary of our soldier does suggest very much that our troops are not getting the deal they deserve.