Armour is not enough 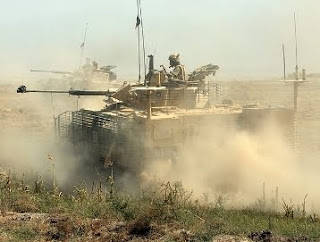 With awful symmetry, both the 150th and the 200th soldier to be killed as a result of fighting in Afghanistan were from the 2nd Battalion, the Royal Welsh Regiment.

Both deaths were also recorded on the 16th, one on 16 March, the other today, 16 August – although the actual incidents that gave rise to their deaths were on the 14th and 13th days of the respective months. The latest death brings the toll in the last five months to 51, an average of a fraction over ten per month. Both were killed by IEDs and both were operating in the Musa Qala district at the time.

There, the similarities end. The first of the pair to die, L/Cpl Christopher Harkett, was at the start of his tour, having been in Afghanistan only a week, caught by an IED while on foot patrol. The second soldier, as yet unnamed, was killed while patrolling in a Warrior MICV.

The only journalist so far to impart this last bit of information has been Mick Smith of The Sunday Times, who reports that the vehicle was not penetrated by the blast that caused fatal injuries. The soldier died as a result of injuries sustained by the effect on the vehicle of the shock wave from the blast.

This is the second soldier to be killed in a Warrior in Afghanistan, the first being Colour Sergeant Krishnabahadur Dura in November 2008. A female soldier was also badly injured. In this case, though, there was understood to be a hull breach.

Since then, additional under-belly armour may have been added but, with a flat base rather than the profiled hull of a purpose-designed blast protected vehicle, the amount of protection afforded would have been minimal, as this incident has shown.

This is not the first time blast effect has been experienced, with a soldier having lost a leg while riding a Mastiff in November 2008. The force of the blast then had been so severe that it had buckled the hull. The Times, however, suggests that more than one soldier may have suffered while riding Mastiffs.

Nevertheless, this is the first time we have seen reported a death arising from blast effect, without a hull breach, in relation to any armoured vehicle. That it should have occurred in a Warrior underlines the limitations of armour, per se and thus emphasises the need for design attributes which will further enhance protection.