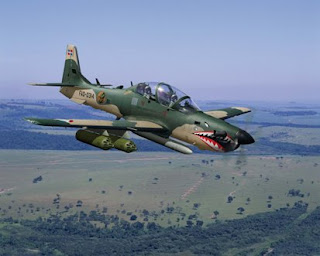 From a minority obsession, the deployment of light turboprop strike reconnaissance aircraft to aid the conflict in Afghanistan has achieved the status of an idea whose time has come.

The latest writing on the wall came with a Pentagon briefing reported on 23 July, when Michael Vickers, the acknowledged guru on special operations and low intensity conflict told a small group of defence reporters that upcoming Quadrennial Defence Review (QRD) would be looking at creating "irregular warfare air units" to beef up the US counterinsurgency capability.

The US Navy is SEALs are, of course, already ahead of the game. They are testing leased an EMB-314 Super Tucano aircraft in the desert ranges in California, under a year-long project codenamed "Imminent Fury", picked up recently by Strategy Page.

But now we learn from Flight Global that the US Air Force has issued a "request for information" (RFI) to identify sources that can supply 100 new aircraft to perform light attack and armed reconnaissance.

This is from Air Combat Command, issued on 27 July, calling for aircraft deliveries to start in 2012 and the first operational squadron to activate a year later.

The known for competitors for the requirement include the Air Tractor AT-802U, Embraer Super Tucano, Hawker Beechcraft AT-6B Texan II and Pilatus PC-9.

The thinking is based on a summary study that concludes that, "As far as can be determined without actual operational testing, the use of light aircraft is suitable, feasible and acceptable", reinforced by a study last year that concluded that a light attack aircraft could save the USAF billions.

This study, conducted by Col Gary Crowder, commander of the Middle East-based Combined Air and Space Operations Centre, complains that there has not been a "substantial ... intellectual investment" into air-ground integration in the 21st Century.

Crowder argues that a platform like the AT-6 could dramatically reduce the number of fighter jets deployed, provide a light observation utility, save thousands of flying hours on the fighter fleet and extend the life of fighter and attack platforms while saving money.

"At the end of five years, you not only have a suitable force that is ... capable of doing counterinsurgency, stability support and peacekeeping operations, you've also saved thousands of flying hours on your F-16s," he says. 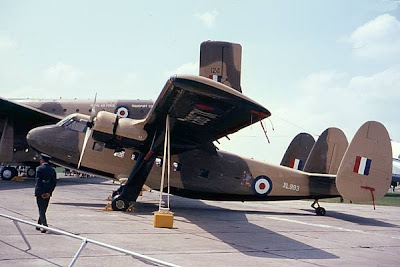 But strike/reconnaissance aircraft are not the only options being considered. A week earlier the USAF issued an RFI for as many as 60 light mobility aircraft (LiMA) to airlift up to six passengers or small loads of cargo from austere or unimproved surfaces.

This goes back to our thinking on the utility of such aircraft as the Pilatus Porter. But the concept of using light STOL transport aircraft goes much further back, to the use by British forces in the 1950s and 60s of the Scottish Aviation Twin Pioneer (pictured above) the Single Pioneer and even the Beaver.

In fact the idea of fixed-wing re-supply aircraft for mobile formations was exploited during the Second World War, using single-engined Waco biplanes to support the LRDG. 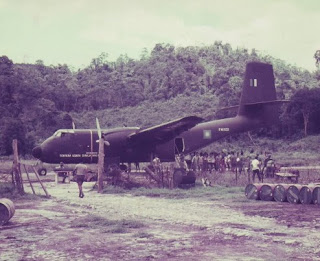 Nor indeed is the idea foreign to the US. During Vietnam, extensive use was made of the DHC-4 Caribou (and other air forces – pictured RMAF, right). The type was operated by the US Army until 1966 when the aircraft were traded to the USAF, under the Johnson-McConnell agreement, in exchange for an end to restrictions on Army helicopter operations.

Therein, actually lie much of the current doctrinal difficulties where, in the UK also, there is an unofficial agreement with the RAF restricting the use of fixed wing aircraft in the Army.

While the issues are being thrashed out in the United States, if there is a debate in the UK about restoring light, fixed wing aviation to the battlefield, it is being carried out in private, with little indication that the Service Chiefs are taking it seriously.

One of the problems, it seems, is that fixed wing aircraft are not seen as a 100 percent answer, providing only supplemental capacity to helicopters on the one hand and fast jets on the other.

As the argument has matured in the US, however, the economic benefits have come to the fore and, as Crowder observes, even if light aircraft take some of the load off existing assets, the overall savings could run into billions.

Certainly, in UK terms, where the media (and political) focus has been on increasing helicopter capacity, much of the capability could be achieved by light, fixed wing assets, at considerably less cost. Where Apaches are currently used to escort Chinooks, for instance (in which role they struggle to keep up with the faster transport helicopters) aircraft such as the Tucano could do the job better.

Equally, STOL transport aircraft could deliver to FOBs – even parachuting supplies in – and support mobile formations, delivering supplies, transferring personnel and even evacuating casualties - as well as radio relay and reconnaissance. They have a possible additional role as a light gunship.

It is a measure of the paucity of the UK scene, therefore, that such ideas are not being openly discussed, or that the Armed Forces themselves are not initiating a debate as a cost-effective way of relieving some of the pressure on air assets in Afghanistan. The debate needs to move on from capacity to capability.

Nevertheless, the rediscovery of light aviation is gaining momentum and, one supposes, three or four years hence, the British media will suddenly wake up to the idea, unless there happens to be a journalist out there who can actually kick-start our military into action. We live in hope.