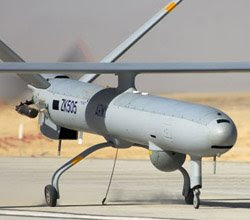 If the reality of Michael M Phillips – for a short period at least – was Jalrez Valley in western Afghanistan, defence correspondent Michael Evans has been living a different reality with "our boys" in Helmand.

Published in The Times on 5 May, Evans gives as a quirky insight into one of the incidents briefly mentioned in the USAF "airpower summary" for 30 May.

The bare bones of that incident, as reported by the USAF, were that "a coalition aircraft" strafed an enemy improvised explosive device team. The aircraft engaged after detecting anti-Afghan personnel setting up a "daisy-chained," multiple-explosive IED. The aircraft used guns rather than a precision bomb to prevent damage to the roadway.

Behind that lies a fascinating story, headed in the newspaper as "Wandering Afghan goatherd holds up lethal attack on Taleban roadside bombers". The location is Garmsir and the narrative begins with four Taleban insurgents appearing at one end of a bridge on what is called by British troops "Route Cowboys". They begin to dig a hole for an IED (Evans calls it a "roadside bomb").

This is a scene that must have been repeated thousands of times, in Iraq and in Afghanistan. Far too many times, the outcome has been fatal for British or other coalition troops. But not this time.

Flying above them at a height of 9,000ft, we are told, is a Hermes 450 UAV, relaying pictures of the scene to British controllers. They call in air support, which materialises in the form of two Belgian F-16s. Evans calls them "Belgian Air Force" aircraft, unconscious perhaps that the BAF was disbanded in 2002, to be replaced by the "Air Component" of an unified armed force. It is a small detail, but a telling one.

The F-16s prepare to attack but they are warned off as a young Afghan goatherd with a few goats around him is seen walking towards the bridge. By the time the goatherd has cleared the scene, one of the Taleban fighters, apparently the leader, has left on a motorcycle while another has began to walk backwards holding a wire and disappeared from view.

Then, and only then, the F-16s are cleared to attack. Rather than dropping a 500lb bomb that would have damaged the bridge, one strafes the area with, Evans says, a "30mm cannon", killing the two bomb emplacers. Our reporter is thinking, presumably, of an A-10 which is thus equipped and the figure he offers does not immediately register. But the F-16 is equipped with a 20mm M61 cannon. Another small detail wrong from the man who "was there".

Anyhow, the remaining insurgent mounts a motorbike and leaves, but the UAV follows him south, observing him as he enters a compound to change clothes and drives off to a rendezvous spot known to be a Taleban command centre. "He was allowed to escape," Evans tells us, without further explanation. Not for long, we suspect.

In this piece from Evans, there is a distinct difference in style, compared with the offering from Michael M Phillips. Both have a narrative of the events they observe but Phillips also works in an element of analysis and something of a "strategic overview". This is entirely lacking from Evans – as it is so often from British media pieces. His is a straight "Boys Own" narrative with nothing of any depth which might trouble the reader.

What Evans does do, however, is demonstrate – perhaps unwittingly – the vital and devastatingly successful role of the UAV in counterinsurgency warfare and, in particular, its "battle-winning capabilities" in the fight against the IED.

Therein lies a further story, one which Evans does not tell – the fact that, had British forces been equipped with the Hermes 450 in Iraq, and in particular in al Amarah, history could have been different. Instead, as we recounted at length in an earlier post, the Army there was equipped with the useless Phoenix, thus requiring patrols to be mounted in Snatch Land Rovers, with the tragic results which we have also recorded.

Even then, the availability of the Hermes 450 was a close-run thing. The original plan was for the Phoenix to be replaced by the more sophisticated Watchkeeper system (a heavily modified Hermes), as part of the FRES capability. Although this was not due to be introduced, and then incrementally, until 2010, the Army initially resisted the idea of acquiring the more basic version off-the-shelf, for fear that it would prejudice the Watchkeeper programme.

It was not, therefore, until May 2007 that the issue was forced, and an Urgent Operational Requirement was issued for the Hermes, too late to affect the outcome in Iraq but in time, as Evans now attests, to do good service in Afghanistan.

Even then, when we could use as many of these machine as could be supplied, even last year, the defence committee was retailing the view of industry that the provision of UAVs for "current operations" could undermine future industrial capacity.

Fortunately, as the political emphasis has shifted from "future capacity" to support of current operations, the Hermes has been bought but, had it been left to the Army and the defence industry caucus, the situation described by Evans might have had a less happy outcome for British troops.

To give him his due, Evans's narrative did not stop with this one episode. He goes on to describe a foot patrol, where more traditional methods of IED detection and disposal are witnessed, but with the Hermes in the air providing persistent overwatch.

A bomb is found using methods which our forefathers would have recognised, illustrating that the battle is now being fought with a meld of the old and the new, the answer – such as there is one - being a combination of tactics and techniques, with no "magic wand" that will deal with all eventualities.

In this, he actually tells us nothing we did not already know, but he also underlines the utility of "protected vehicles", recalling an earlier incident he had reported. This was where a Mastiff had successfully withstood a "donkey bomb" - two buckets hanging on either side of a tethered donkey filled with an estimated 20 Kg of explosives and set off as the vehicle was passing. No one was seriously hurt.

One additional detail is interesting. To help in the hunt for IEDs, we are told that "every aircraft with photographic capabilities roams the skies to look for Taleban fighters digging up the ground. Even the US Air Force B1B bomber has been used because of its advanced cameras."

Despite all this, the IED is still regularly claiming victims. Elsewhere, however, we learn that the successful countermeasures, and especially the use of better armoured vehicles, is – as we would expect – provoking a Taleban response.

The conventional wisdom is that the insurgents would simply build bigger bombs, but in fact the Mastiff has proved so resistant to attack that, even despite six stacked mines being used, no soldier has yet been killed in one.

What seems to be happening is that Taleban bombers have shifted to attacks on Afghan soldiers and police, who do not have the MRAPs or other countermeasures. Thus, with about as many Afghan personnel as there are coalition troops, the Afghans are taking higher casualties because they are more vulnerable.

In Iraq, the US found it necessary to equip the Iraqi Army with its own fleet of MRAPs, and with IED investigation equipment, and it looks as if a similar programme will have to be mounted in Afghanistan. But, for the moment, at least some progress has been made.

More and better technology is still needed. Some is on its way but there are still gaps and glaring deficiencies in an Army which should have been better prepared but which has been behind the curve throughout the campaign.