A tale of two armies 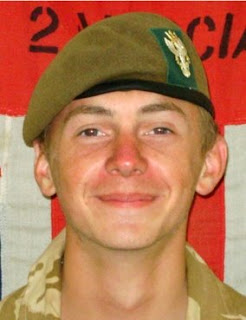 Primitive British mine/IED clearance methods, compared with their US counterparts, may have been responsible for the death of Private Robbie Laws, 18, of the 2nd Mercian Regiment – to date, one of the youngest soldiers to die in Afghanistan.

On 4 July, Private Laws was attached to a squadron of the Light Dragoons which were operating Scimitar light reconnaissance tanks taking part in operation Panther's Claw. Laws was part of a four-man "dismount" team carried in a Spartan armoured personnel carrier (pictured below right), his and his comrades' task being to carry out mine/IED sweeps on foot, using hand-held detectors, ahead of the armoured vehicles, whenever their commander suspected a possible trap.

Recounted in detail by The Daily Mail, after Laws and his comrades crossed the start line in their Spartan on 4 July, they were soon called into action but, as they dismounted, Taleban fighters opened up with small arms. A Scimitar armed with 30mm Rarden cannon moved up to engage them, setting a pattern for the operation. The advance thus continued in a stop-start fashion as Laws and his comrades painstakingly cleared the route with their detectors. 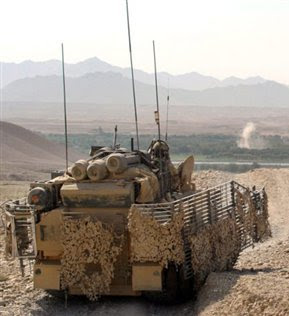 Come the late afternoon as the light and intense heat began to fade, Laws and his comrades had been resting by the side of the vehicle for an hour or so, then helping to unload another Spartan which had come in from a water resupply run. Small arms fire started coming in and the Light Dragoons started their vehicle engines. Laws and the three other dismounts piled into their Spartan, which began to move.

Some 200 yards on, the squadron commander ordered two men to dismount to carry out a sweep ahead. Laws with one other completed the task and remounted. As the Spartan started to move off, there was a "massive bang" and the cabin filled with smoke. The vehicle had been hit by a Taleban RPG. Laws was killed instantly, another soldier was very seriously injured and one other was slightly injured.

It is of course the case that the Spartan could have been targeted at any time during the operation by a Taleban PRG, with fatal consequences. But the main defence of this lightly armoured vehicle is its speed and manoeuvrability over a wide range of terrain. Its constant stop-start progress, and pauses to allow manual sweeping, thus made it a predictable and highly vulnerable target while it was stationary.

Compare and contrast, however, the experience of the US Marines further south, confronted by multiple IEDs impeding their progress. In terms of delays, their clearance team was no less impeded. But, unlike the British using lightly armoured personnel carriers with infantry using hand-held detectors, working on foot, the Marines were properly equipped.

Their 10-vehicle clearance team included a vehicle equipped with a mine roller, pushed ahead to detonate pressure-pad actuated mines and IEDS, a Husky mine detection vehicle (pictured below) and a number of MRAPs, all manned by specialist combat engineers. 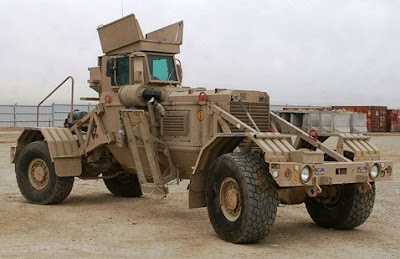 After 72 "tough hours" on the road, the first IED destroyed an anti-mine roller being pushed by the convoy's lead vehicle. The explosion sent the roller's pieces flying into the air, and flipped the 17-ton onto its side, nearly toppling it into a canal that ran beside the dirt road. The crew, however, escaped unharmed.

After an overnight wait, a recovery team with specialist lifting equipment was despatched along the same route, only to hit an IED that had appeared to have been planted overnight specifically to strike them.

The explosion wrecked their vehicle but fortunately, it was another MRAP and the crew escaped unharmed. Then, and only then with the scene secure, did the Marines used hand-held mine-sweepers to check the road between the two blasts and then destroyed burnt damaged equipment to stop it falling into Taleban hands.

The convoy finally got back on the road by the evening but within an hour it was hit by a third IED that destroyed the Husky. The crewman survived. In between that point and the first of the blasts, the team had covered only a couple of miles of road and had discovered and dismantled seven further IEDs.

Said the convoy commander, Lieutenant Dan Jernigan, "Vehicles are being blown apart but the Marines inside are being kept safe. Not to sound cavalier, but it is better we take the blast than Humvees or someone else such as villagers." He was surprised that there had been no Taleban ambushes targeting his convoy when it had been stranded, but the vehicles were well armed and armoured – unlike the Spartan – and able to protect themselves.

The clearance process here was being applied to a supply route, but exactly the same process could have been applied to the route taken by the Light Dragoons. Typically then, the route is kept under observation after clearing – by UAVs or even infantry stationed along the route. As a final safeguard, an MRAP precedes the tactical convoy – a process known as "route proving" – to take the blast from any device that has been missed, or where emplacers have managed to evade observation and plant another bomb.

With a route almost guaranteed free from emplaced explosives, light tactical vehicles can then exploit their mobility and speed, without being tied to the stop-start routine that dogged the Light Dragoons, making their vehicles such vulnerable targets.

With such procedures in place, even the lightly armoured Vikings could be used with impunity, their routes through danger areas cleared, allowing them to exploit their off-road performance once they safely reach open country.

Ironically, the clearance and proving procedures – and the equipment to carry them out – were pioneered by the British – and used with great success in Bosnia in the early 90s, being copied by US forces and applied to both Iraq and now Afghanistan. Since Bosnia, however, the specialist equipment acquired by the British has been sold or otherwise disposed of. The need for such now again belatedly recognised, more equipment was ordered last October under the "Talisman" project, but deliveries are not scheduled to commence until next year – although the vital Husky is not being procured.

That is the measure of the shortfall in the British operation, but this is not a shortage of finance – clearly, as the equipment is now on order. More likely, it reflects the failure of the British Army to recognise and pre-empt the threat of mines and IEDs, with tragic consequences which stretch back into the Iraqi campaign, where troops in Basra and elsewhere faced similar threats and were similarly ill-equipped.

In this day and age, while there is still a valid and extensive role for the hand-held detector, there is no excuse for the excessive reliance on dismounted teams to do a job which could often be done more safely with armour and machines. That they are not available is yet another of those scandals, for which there should be a reckoning.