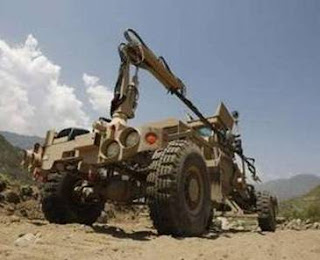 It is easy to recall the squawks of media indignation when Gen Dannatt artfully explained that the reason for his travelling on a US Blackhawk helicopter during his tour of Helmand in July was that there was no British machine available.

Helicopters, of course, comprise only one aspect of the shortage of British equipment in theatre. There is equally a pressing need for specialist mine/IED detection and clearance vehicles, the first of which are not due to arrive until next year as part of project Talisman.

Given the carnage caused by IEDs, one might have thought that the media might show some interest in this vital deficiency, not least because this equipment – even more than helicopters – is needed to protect supply convoys and mounted troops as they go about their patrols.

However, despite US forces, the Canadians and now the French having acquired such equipment, the British media has been almost completely silent on this remarkable and dangerous lack of capability in the British Army.

Interestingly, we now see Kim Sengupta, of The Independent writing about Operation Tor Shadey, the last offensive by British and Nato forces to clear insurgent-held areas before this week's national elections.

Entirely with critical comment, though, he notes that the British convoy, moving through the night to the operational area was "a laborious affair", trailing behind "an American anti-explosive unit, Task Force Thor, with specialised vehicles, sweeping the road ahead for the ever-present threat of bombs."

This is the same Kim Sengupta who enthusiastically wrote up the debate on helicopters, but he (and his fellow hacks) is apparently completely unconcerned about the shortage of equally vital equipment.

Of course, Sengupta could have made this an issue, focusing his piece on a "shortage of IED clearance vehicles" which had forced the British to rely in US resources. But then, while helicopters are part of the "narrative", IED clearance equipment is not.

It is probably not unfair to assert that the media furore over helicopters has at least focused ministers' minds on the shortage of helicopter capacity, and perhaps ensured that machines will be brought to theatre a little earlier than they might have been.

If that is the case, then arguably, a similar furore over the criminal lack of specialised IED clearance vehicles could have had a similar effect. To that extent, it would not then be unfair to assert that the trivial, superficial and careless conduct of the media over such equipment is part of the problem.

Journalists do like to dish it out, and are ever so good at criticising all manner of people – especially defence ministers – who might offend them (or provide good copy). But one wonders whether they might also think about taking some responsibility for their own conduct.