Everybody's wrong but us! Emerging from the ongoing debate about the deployment of the Supacat M-WIMIKs to Afghanistan, one undisputed fact is that the original vehicle was developed specifically for special forces, replacing the "Pink Panther" Land Rover.

A completely unarmoured vehicle, it is held, is entirely justified on the basis that, above all else, special forces require speed and manoeuvrability, and rely on that, plus firepower and tactics to confer a degree of protection.

It may come as a surprise, therefore, that US special forces have just placed an order for their own vehicles and, despite the Supacat licenses being held by Lockheed Martin, that vehicle was not in the frame.

Instead, it is reported, that the vehicles to be procured are 350 Mine Resistant Ambush Protected RG33s. The order, worth $234 million (or a unit price of something like a third of what the British are paying for their Ridgebacks), covers three special forces command vehicles, 51 ambulance variants and 393 RG33 Category II 6x6 MRAP variants.

With the US ground forces also procuring 500 RG-31s specifically for Afghanistan, it would now appear that, unlike British forces, most US soldiers will be travelling (and fighting) in armoured vehicles. 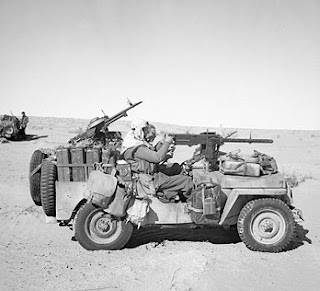 To a very great extent, this points up the doctrinal differences between the British Army and the US, except that the Germans, the Australians, Dutch and Canadians – to say nothing of the Estonians – all employ armoured (mine protected) vehicles. Only the British, it seems, are so determined to rely on unarmoured "high mobility" vehicles for a substantial part of their activities.

Revisiting the genesis of this doctrine, this of course goes back to 1943 and SAS operations in the North African desert. There, the use of heavily armed jeeps (above right) was pioneered, very little different - in principle - from the Land Rover WIMIK currently deployed. 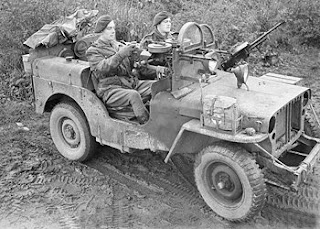 Interestingly though, although that doctrine was pioneered 65 years ago, it did not actually survive the Second World War. By 1944, when the SAS was deployed in Northern Europe, Jeeps were progressively being armoured – this version here fitted with armoured glass and a front armoured panel.

And, although the RAF Regiment is currently using the same Land Rover WIMIKs as their Army counterparts, with which to carry out patrols, during the latter part of the Second World War – and beyond – they were not to be seen in unarmoured Jeeps, SAS-style. 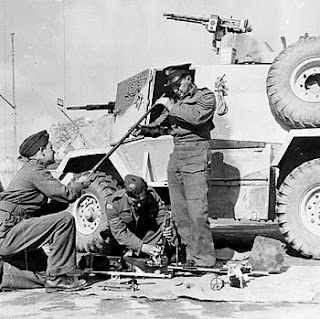 For their mobile patrols, RAF Regiment personnel were issued with Canadian-built Otter armoured scout cars (pictured), which did service right through Northern Europe.

Far from being a well-tried and tested doctrine, therefore, the use of unarmoured jeep-like vehicles seems to have been a transitory phase during one phase of the desert war, not to be repeated in other theatres.

Furthermore, as this photograph shows (below left), the Long Range Desert Group, which operated alongside the SAS, developed a highly sophisticated resupply regime, using two light, American-built aircraft – a Waco YKC and a Waco ZGC-7 – which they managed to "acquire". 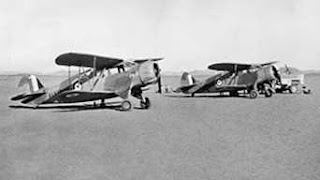 Readers will recall us extolling the virtues of the Pilatus Porter for just this type of operation, and it is of more than some interest that, those 65 years ago, a similar idea was not only mooted but actually implemented.

It is a matter of some puzzlement, therefore, why the British Army cannot adopt techniques and equipment that seemed to have worked effectively, yet are so enthusiastic about cherry-picking doctrines which have limited utility and which are shared by no other forces.

Still, as the British Army is so adequately demonstrating in Basra, its grasp of counter-insurgency techniques is beyond comparison, suggesting that what the British Army does must always be right and everybody else – including their predecessors (and this blog) – is wrong.