Not even cat litter 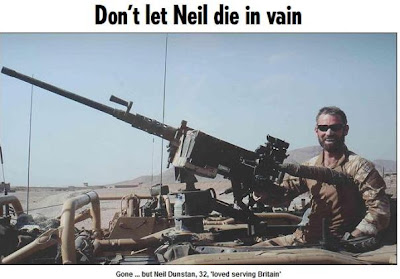 Yesterday, with the coroner's inquiry into the death of Trooper James Munday, the first soldier to be killed in a Jackal, we could have been something of a landmark in seeking better protection for our troops exposed to IEDs in Afghanistan. Instead, the opportunity was frittered away by a quiescent coroner and our loathsome media.

Worst of all though is the media. Too lazy and ignorant to see past the MoD "spin" – without exception the hacks went for the "human interest" angle of the grieving mother and her understandable but entirely misplaced attack on "politicians" who were "feathering their own nest".

First in no particular order was The Times which headlined "Dead soldier’s mother criticises politicians over Afghanistan". It then tells us of "the mother", Caroline Munday, who spoke of the "hellish conditions" the troops were facing, and said that politicians should concentrate on the needs of serving soldiers rather than "feathering their own nest".

Only then do we learn that Trooper Munday was killed while driving the Jackal, with a careless injection of MoD "spin" as the vehicle is described as open-top and "mine-resistant" – even though that term has a very specific meaning and it most certainly does not apply to the Jackal.

Then we get more of the "spin" as Mrs Munday is recorded faithfully parroting what she had been told, saying "she was aware the protection capabilities of the Jackal had been criticised, but said she understood that if an IED was big enough, it could kill those travelling in it." Thus she utters the words thaqt must have delighted the MoD, declaring: "If an IED is big enough unfortunately, if you are in the wrong place at the wrong time, it’s going to take lives."

We are then laboriously informed that all equipment was working properly at the time of the explosion. Trooper Munday was wearing the correct body armour and other kit, and the Jackal was armoured underneath to provide protection.

So there we are then, as far as The Times is concerned – just one of those tragic events. Move on, nothing to see here, says the report, written by the same Michael Evans who earlier reported on the "tenth soldier killed in 'flawed' vehicle" – the very latest Jackal casualty.

Then we have The Guardian, this time with the headline "Grieving mother accuses government of failing to provide best equipment," the story complete with the "feathering the nest" gibe and then quoting Caroline Munday, saying: "Our troops are fighting in hellish conditions. I hope our government will stop feathering its own nest and provide our guys with the best equipment they can because they deserve it. I am so glad the other two soldiers survived. God bless our soldiers."

However, we also get Warrant Officer Mark Hatton, of the army's special investigation branch. We learn that the Jackal Munday had been driving was not faulty. Then we get:

The IED was carrying between 15 and 20kg of homemade explosive which was detonated by a pressure plate when the vehicle drove over it. It was a significant amount of explosive. The Jackal did have protection underneath. It is a tragic set of circumstances. James did have all the right protection which unfortunately didn't save him.

Ah ... the "tragic set of circumstances" – move on, nothing to see here. Unremarked is that, had between "15 and 20kg of homemade explosive" gone off under the wheel of a Mastiff, a Ridgeback, or any Class I MRAP, the vehicle would have shrugged off the blast and Munday would probably not even have suffered a headache.

MRAPs are resistant to 14kg TNT equivalent under any wheel, and with homemade explosives producing as little as 30 percent of the blast effect of military explosives, not only would Munday still be alive, the vehicle could have been back on the road in a few hours, fully repaired.

But all we get is that Warwickshire coroner Sean McGovern recorded a narrative verdict that James died from blast wounds.

From The Daily Express, we get the same dire fare. The headline is, "Mum tells labour: you must put troops first", "feathering the nest" gets an airing and we are told that Trooper Munday served with Princes William and Harry in the Household Cavalry's D Squadron.

As for the Jackal, it was "hit by a 45lb roadside bomb" and "athough the Jackal had a specially reinforced floor, the young soldier was killed." Two other soldiers with Trooper Munday were injured in the blast but survived.

And, while we have the paper declaring that "the timing of Mrs Munday's attack will embarrass Gordon Brown as his funding strategy for the war comes under close scrutiny," we also get MoD plant, Warrant Officer Mark Hatton, who tells the inquest: "The Jackal did have protection underneath. James did have all the right protection, which unfortunately didn't save him."

Finally, for no apparent reason, we get from The Sun a eulogy (which also appears in a number of other papers), not for Trooper Munday but another Jackal casualty. Neil Dunstan (pictured) one of two of the three-man crew killed.

And there, embedded in the text is the MoD's planted message – the whole reason for the piece – helpfully articulated by Dunstan's surviving girlfriend, "Brave Kate", who was due to wed Neil next July.

She, we are told, doesn't blame his death on a lack of kit. She said: "Even if Neil was in a better armoured vehicle, the bomb still would have taken him from me. It's a miracle one person survived."

What makes The Sun particularly loathsome is that, as the self-appointed champion of "Our Brave Boys", it so easily retails MoD propaganda, and thereby helps perpetuate the equipment flaws which are killing them.

The final travesty though is The Times which, three days ago had Melanie Reid take exception to that dreadful Top Gear puff, with Jeremy Clarkeson playing with the Army's latest kit. She writes:

The film was designed to show-case the Army's mechanical machismo. The Jackal. The Mastiff. The Panther. The Trojan. Millions of pounds’ worth of futuristic military hardware possessing shields to deflect bombs, probes to clear mines, grabbers to grab stuff; and the horse power to whisk men to safety. Everything, in fact, designed to enable the Army to wipe out the enemy, any enemy, in a few hours. Just like it happens in the movies. And in Army recruitment films.

Except that, the Top Gear credits having rolled, one switched over to the Ten O'Clock News and the real world. That's the world where young British soldiers are being pinned down in vehicles that cannot protect them and are being wiped out by roadside bombs. Take the Jackal, for instance, so mine-resistant that ten men have died in it in the last year in Helmand.

I don't mean to criticise Top Gear: it represents some of the most fun to be had on TV. But their timing was rotten. When eight young men have died within 24 hours, blown up because of a lack of military hardware to protect them, there was a terrible irony to that episode. And when the real world runs up against a play world, we have to be very careful.

None of these papers today are even worth using as cat litter. Full of faux concern for our "brave soldiers", when the chips are down, not one of the reporters dealing with the Munday inquest gives a tinkers damn, as long as they can fill their spaces with the easiest available garbage.