A little out of date? 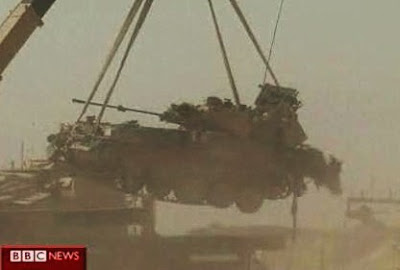 The latest vehicle casualty, whom we speculated could have been riding in a Jackal, turns out to have been the driver of a Scimitar – one of the CVR(T) series (pictured after a mine strike).

This was Trooper Phillip Lawrence of the Light Dragoons, who was killed on 27 July while part of a patrol in Lashkar Gah district, helping to ensure the security of an area cleared earlier as part of Operation Panther's Claw.

As a light tank, procured for reconnaissance duties, this vehicle is very lightly armoured and provides little protection to IEDs and mines. Thus, like much of the other equipment fielded by the Army in Afghanistan, it is far from optimal.

That certainly is the view of Patrick Mercer, who has told a local Lancashire paper that the vehicle is "hopeless". Despite it still looking quite modern it is considerably aging and outdated, he says, arguing that the forces need new a generation of armoured vehicles "to better protect our troops."

From there, however, the gallant Mercer seems to go off the rails. The Scimitars, he says, "were due to be replaced by a Fres System - Future Rapid Response System - a few years ago but this was abandoned as it was too expensive."

The man, of course, means the Future Rapid Effects System, which, "as the replacement programme," he adds, "foundered due to mismanagement acquisition by the armed forces." We are now left, he claims, "with a generation of older vehicles badly needing incremental improvements."

Here, Mercer seems to be referring to the utility vehicle programme, which was never meant to replace the CVR(T). In part, this series was supposed to be replaced by the Panther, and he might have a well-founded complaint about the delay and expense, but he cannot say this vehicle has "foundered".

Furthermore, he seems to be completely unaware that a further CVR(T) replacement is well in hand, with the announcement made in July, with the bidders to be confirmed in September, with new vehicles in service from 2014.

A five year delay to replace an unsuitable armoured vehicle which is already 35 years old is something of a scandal but not the picture Mercer paints.

Further comments also seem somewhat awry as Mercer then goes on to opining that: "The trouble with an armoured vehicles is you can take a bank vault and put it on tracks and this will not be pierced by an explosion but it will be thrown in such a way that everyone inside will be killed."

"The shear (sic) kinetic energy from these explosives makes travelling by vehicle extremely dangerous," he adds.

Somehow, one gets the feeling that life is passing by Lt-Col Mercer (Retd), with the developments in blast protection having escaped him. We have never been particular fans of the man, not least because he seems to flying on autopilot, relying on past reputation.

As an MP with claimed expertise in this area – and one never reticent to share it – one would expect a little better from him. Rather like the Scimitar on which he comments, though, he seems a little out of date.