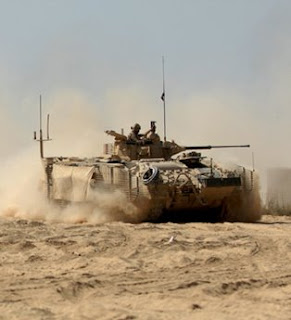 The news which emerged yesterday of the second Gurkha soldier to be killed within a month in Afghanistan has disturbing implications. Unlike his comrade-in-arms, Rifleman Yubraj Rai who died of a gunshot wound after a firefight south of Musa Qala on 4 November, this as yet unnamed Gurkha was riding in a Warrior MICV (pictured).

According to The Daily Mail (online edition) – which was the first to identify the vehicle involved - the Gurkha was killed "after a massive roadside bomb tore through his 25-ton Warrior fighting vehicle." A number of other soldiers onboard were, according to its report, "seriously injured".

It is the first time, says the paper, a soldier has been killed inside a Warrior in Afghanistan, "and proof that the Taliban are turning to bigger and deadlier bombs targeted at British troops."

The paper adds that, until recently the Warriors were largely considered "mine proof" but then it tells us that at least three Warriors have been damaged "beyond repair" in the last eight months "as the Taleban bomb makers set ever bigger charges in British soldiers' paths." In addition, there was an early attack in February of this year.

When the Warriors arrived in Afghanistan in mid-August 2007 (see this video report), we applauded the deployment of these fighting vehicles which, very quickly had a decisive effect on the conduct of ongoing operations.

But, in this current instance, the Warrior was not being used for the purpose for which it had been designed – as an armoured assault vehicle. Instead, as part of a company of Warriors, it had been based outside Musa Qala, in Forward Operating Base Edinburgh. Together with Mastiffs, the Daily Mail reports, the vehicles have been used "to ferry soldiers to and from the outposts, which ring the volatile town." As The Independent puts it, "they are often used as armoured buses to move soldiers to and from outposts … because they used to be considered 'mine-proof'".

Any such assumption is entirely unjustified. The Warrior is not and never has been "mine-proof". The Army, therefore, is misusing these vehicles (whether to are forced to, or not because of kit shortages is another matter), for a job for which they are not designed and for which the Mastiffs, working alongside them, are superb.

In all, there have now been 22 deaths of British soldiers in Warrior-related incidents in both Iraq and Afghanistan since the formal end of hostilities in May 2003. By no means all of these resulted from IED attacks but many did, including the horrific incident on 5 April 2007 outside Basra, which resulted in the death of Second Lieutenant Joanna Dyer, and three of her comrades. 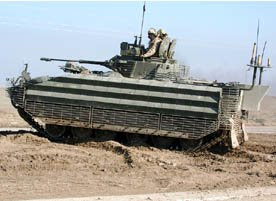 As remarked at the time, the underbelly of the Warrior is relatively lightly armoured and, even though they have been fitted with enhanced armour (pictured), their flat-bottomed profile makes them difficult to protect and limits their resistance to IEDs.

What may be happening here, though – in a manner similar to the way the Jackal has been treated - is that the Taleban have been "trying out" the Warrior and, having already written off a number of these vehicles, have evidently worked out a way to destroy them.

We saw something of what appears to be a similar dynamic in Iraq. Initially, the insurgents concentrated their fire on the more vulnerable "Snatch" Land Rovers, firstly in al Amarah and, when the "Snatches" were taken off the streets there and replaced by Warriors, the attacks moved to Basra where these vehicles were still being used for routine patrols.

When the use there of "Snatches" was limited – and many of the patrols were conducted by Mastiffs, which were arriving in ever-greater numbers - we saw attention focusing on the more vulnerable Warriors. In the latter stages of 2006 and in early 2007 there were a number of serious attacks, details of which were suppressed because of the Army's concern for morale and the effect of a public (and Parliamentary) hue and cry.

Thus, when Sergeant Graham Hesketh was killed on 28 December 2006 as a result of an IED attack on a Warrior, followed by the death of Private Michael Tench in January of the following year, these were seen as isolated incidents and not for what they were – part of a sustained assault by the insurgents on this vehicle type.

It was not until April of that year with the death of Second Lieutenant Joanna Yorke Dyer that the Warrior came to public notice but even then, the incident was seen largely in isolation, with the media focus largely on the deaths of two women soldiers.

Even after that, the deaths from IED attacks on Warriors were to continue, the last known fatal attack recorded on 31 July 2007 when Corporal Steve Edwards was killed. 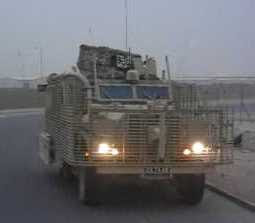 By that time, however, Mastiffs (pictured left) were being fielded in some numbers replacing both "Snatch" and Warrior and successfully resisting attacks on them. The Army pulled out of the last but one peripheral base, the Provincial Joint Co-ordination Centre (PJCC) in Basra, and – as rumour had it, only subsequently to be confirmed - British commanders struck a deal with leaders of Moqtada al-Sadr's 17,000-strong Mahdi Army to ensure the safe departure of troops from Basra Palace.

By early September the Army had retreated from Basra Palace and hunkered down in its new increasingly fortified base at the former Basra International Airport, leaving perimeter security largely to the Iraqi Army.

The limited sallies outside the wire were increasingly made in Mastiffs, which continued to resist attacks and, with no more Warrior deaths being reported, another publicity storm over inadequate equipment had been averted.

As for the situation in Afghanistan, the imminent arrival of additional Mastiffs and the Ridgeback may save the Army's bacon yet again, allowing the Warriors to be redeployed for their proper role – infantry assault. They will be safe enough in that role providing their routes to and from the battlefield are cleared by dedicated mine-clearance equipment. This the Canadians have found it necessary to do before their conventional armoured vehicles are allowed out of base. They have learnt the hard way exactly the lesson which the British forces seem intent on experiencing again in Afghanistan. 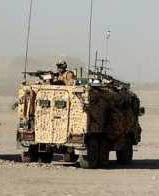 But still, the shadow of Army lethargy and MoD procurement delays hangs over the battlefield. Apart from the delay in buying the appropriate route clearing equipment such as the Buffalo - which will not be in theatre until at least 2010, when on 24 July 2006, Des Browne announced the order of 100 protected vehicles, which later turned out to be Mastiffs, he also announced the purchase of 100 additional Pinzgauer Vector vehicles (pictured right) for Afghanistan.

This, as we revealed later, had been forced on him by the Army, which had been lukewarm about the Mastiff and had effectively made its approval of the purchase conditional on the procurement of the additional Vectors. Thus, the bulk of the Mastiffs went to Iraq, while the Vectors provided the mainstay of additional "protected" vehicles for Afghanistan.

With these machines now so heavily compromised that the Army dare not use them in high-risk situations, this means that money spent on them has largely been wasted. Totalling nearly £50 million, that would have bought some 50 or so extra Mastiffs which could so easily have been ordered in July 2006.

For want of these extra machines, the Army on the ground has been forced to use the Warrior for a purpose for which it is entirely unsuited, with the result we have seen reported today. And still it seems, there are those who have not understood the lessons – a response which entirely typifies a certain cadre within the Army. History will have to repeat itself once more, before these dinosaurs are finally driven to extinction.

The problem is though that papers like The Sun, apparently lacking any corporate or institutional memory, are also reporting on this incident in terms of a "safe" tank, suggesting that the Warrior was "once thought bomb proof" – forgetting entirely the experience in Iraq.

Then we get The Guardian citing an unnamed "defence source" commenting that these latest attacks suggest the Taleban's bombs are more powerful and more sophisticated. "If a bomb is big enough, it will go through anything," this source is quoted as saying.

This will add sustenance the dinosaurs who claim that, since a "tank" can be blown up by the Taleban, it is impossible to protect lighter vehicles. In some quarters, therefore, this experience will be used as an argument against, rather than for more MRAP-type vehicles. There too, history repeats itself.