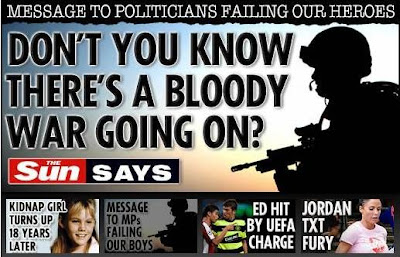 "Don't you know there's a bloody war on?" proclaims The Sun today, parading the "207 faces of our Afghanistan dead" (but not, of course, the faces of the Danish or Estonian dead). They are, declares the paper, "stark reminders of the bloody war we are fighting".

Immediately, it then rams home its favoured narrative – government baaaaad, Army gooood - developing the theme with a series of talking heads, each offering carefully crafted sound-bites all cherry-picked to support the narrative.

"Wounded heroes are fobbed off with pittances and generals are ignored when they beg for better kit. Our troops deserve better. Much, much better," we are told, the paper citing the great sage, Lord Guthrie, who points to a "scathing dossier on procurement disasters written by an experienced Labour defence adviser."

Three examples are given, the "Surveillance planes due in service by 2003 will not arrive until 2010, with the cost of each having risen from £100m to £400m", the "new battlefield radio developed at a cost of £2.4billion proved too heavy to carry and didn't work properly anyway" and a "new class of submarines due in service four years ago is not expected to arrive until next year after huge rises in cost."

Quite what the relevance of a "new class of submarines" is to the "bloody war" in land-locked Afghanistan is not explained to the readers, the Bowman radio problems are largely sorted and as for the "surveillance planes", these are the Nimrod MR4s which are not intended for land surveillance in Afghanistan.

Their role (previously provided by the MR2s – which were a highly unsatisfactory stop-gap) is being provided by a combination of other assets, including the Hermes, Predator and Reaper UAVs, the Shadow R-1, the Sentinel and Rivet Joint.

That The Sun is playing mind games is further illustrated by its follow-up assertion that, "... we already know that life-saving armoured vehicles were stuck in Dubai for want of planes to take them to Helmand." This is the Ridgeback saga and, as we already know, the delay in fielding these vehicles has nothing to do with a shortage of "planes". It was the Army's decision to delay deployment until the next roulement, against the wishes of the politicians who wanted them fielded immediately.

The issue here is that The Sun knows this as well but, in pursuit of its cheapskate Punch 'n' Judy narrative, such an inconvenient fact does not fit with the message the paper is trying to convey. And, we already know that when a fact does not fit the story, the answer is to change the fact.

Everything, of course, must be expressed in terms of personalities, so on is also wheeled General Sir Anthony Walker, former deputy CDS to fulminate about the "shame of politicians". Thus does Walker have it: "...our gallant troops, excellently led in Afghanistan, are under-resourced and poorly directed by the MoD. The quality of the ministerial and bureaucratic team in the MoD is woeful. Even the Secretary of State is widely known as Bob Ainsworthless on ARRSE, the Army internet chatroom."

This sort of sniping is hardly worthy of a General, retired or otherwise, especially as the military establishment is so quick to condemn Labour "smears" against one of their own, General Dannatt, who departs from his post today as CGS.

Would that we could see some balance, such as that offered by Stephen Grey, but that is not The Sun's style. It has a narrative to sell and nothing must get in the way of that.

That a tabloid should play to the gallery in this manner is, of course, no surprise but what is less acceptable is that its low-grade analysis is endorsed by apparently serious politicians such as John Redwood. He notes with approval that the paper "asks the right questions".

That rather illustrates the level of commitment from our politicians, and especially Mr Redwood who has never knowingly attended a defence debate, yet is now so expert in his pronouncements.

Taking on The Sun however, is not on the agenda. This is the publication which claims to be "proud to be the Forces' paper." It tells us, "We admire their astonishing courage and weep for their dead and injured. But they need the right kit. They need money. They need to feel their Government is behind them."

It would be helpful also if the media was behind them, supporting them intelligently instead of using them as a political football and exploiting their needs to promote their own sales. And it would be even more helpful if the politicians could see through the hypocrisy of the media and define their own agenda. But then you can't have everything.