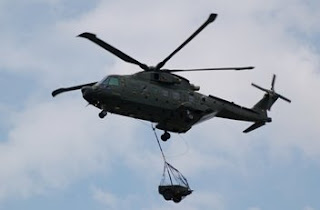 In March of this year, Ann Winterton asked the defence secretary (then John Hutton) how much it was going to cost to upgrade the Merlin fleet to theatre standard, to allow it to be used in Afghanistan. At that time he replied that the upgrade would cost "in the region of £50 million". This equated to an estimated average of £1.8 million per aircraft.

The same question asked in July, however, elicited a slightly different response. Then, the price for upgrading the 28 Merlin Mk3/3a helicopters had miraculously dropped to "the region of £42 million", equating to an average of £1.5 million per aircraft.

Defence secretary Bob Ainsworth explained this unusual as "due to improved maturity in our cost estimates following work undertaken in the intervening period." However, there may well be a different explanation – in part, at least.

According to Thomas Harding in The Daily Telegraph, in order to get the Merlins out to Afghanistan by the end of the year, Kevlar armour has been omitted from the load compartment – thus producing a saving of £100,000.

The armour, similar to that fitted to a Snatch Land Rover, protects troops from small calibre weapons and fragmentation from RPGs, and has been a requirement in operational helicopters ever since June 2003. Then, a Chinook attempting to land a relief force to aid embattled troops in the Iraqi town of Majar al-Kabir, took heavy gunfire which injured seven, some seriously.

Writes Harding, the lack of armour will severely restrict the operational use of these helicopters. Possibly, they will be restricted to "safe" areas (if there are any) and for the transport of supplies rather than personnel. At over £30 million each for the six ex-Danish Merlins, this would make them the most expensive delivery trucks in the world.

The one consolation (one must always look on the bright side) is that, without the armour, the Merlins will be able to carry considerably more supplies than they otherwise would and, when flying empty, the carbon footprint will be slightly reduced. Al Gore would be proud.