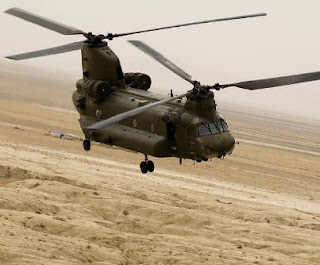 At the moment, even though the incident apparently happened last night, details are sketchy. We learn from Reuters that a British Chinook helicopter made an emergency landing in southern Afghanistan following an engine fire, but the crew escaped unhurt.

From the MoD website, we learn that the incident happened after two helicopters dropped off cargo and passengers a few miles north of Sangin. Shortly after take-off "the four-strong crew of one Chinook saw cockpit indications of an engine fire during take-off."

The pilots skilfully continued to manoeuvre the helicopter about 1km away from the "danger zone" (the MoD phrasing) "to safely make an emergency landing." All four crew onboard managed to evacuate the aircraft safely. They were recovered by the second helicopter which took them out of the area.

The MoD, initially, quite deliberately did not rule out enemy action, and have now confirmed that the aircraft was brought down by a combination of "RPG and small-arms fire".

Precisely what damage was caused has not been revealed, but a Chinook has a sophisticated and highly effective fire suppression system and, therefore, a straight engine fire should not present a catastrophic emergency. Furthermore, the engine casings are heavily armoured, which makes you wonder what sort of weapons were deployed. Then, the aircraft has a capability to fly on one engine, especially if it is lightly loaded, as was the case.

Interestingly, the extraction of the four crewmen was effected by the other Chinook, rather than relying on – say – the quick reaction force from Sangin (or even the troops who had just been dropped). One should not read too much into this, especially as the other Chinook was in the air over the scene, but in the event that the crew were uninjured, one might expect them to remain by their machine, pending either repairs or arrangements for recovery.

This brings in a fourth point, that the aircraft was subsequently destroyed by a coalition airstrike, to prevent it from falling into the hands of the Taleban. This clearly indicates that it there was a significant enemy threat and that it was thought tactically inadvisable to commit ground troops to secure the area.

For such a high-value asset, the possibility of recovery would have been strongly considered – unless of course the aircraft was much more badly damaged than has been indicated, and was already deemed to be beyond economic repair.

In fact, that seems to have been the case. According to The Times, a Special Forces unit had disembarked with their kit only minutes earlier, but when the helicopter lifted off with just the four-man crew on board, it came under attack. The engine burst into flames and the crew had to fight the controls to make an emergency landing. "They managed to fly the Chinook forward 500 metres to reach a safe area before landing it," one MoD official says.

The "unrecoverable" helicopter was still on fire and a decision was taken to destroy it to prevent Taleban insurgents from seizing any of the equipment on board. A Nato bomber was called in and dropped a 500lb bomb on the wreckage.

The fact that it was destroyed says a great deal about the strength of the coalition grip in the area, where a considerable number of operations have been mounted to "chase out" the Taleban. Normally, the preference would be to secure the site, even if the aircraft was destroyed, in order to carry out a crash investigation.

That this aircraft was downed as result of enemy action comes as no surprise. Since April, we have been aware of a deliberate Taleban strategy to down a Chinook, with it becoming very obvious that these helicopters were targets.

Further evidence came with the downing of the Mi-26 in July, followed by an initial announcement by the Taleban that they had shot down a Chinook, when it was even more evident that the enemy was aiming for a "spectacular". Fortunately – the aircraft downed was empty, and no one was hurt. The Taleban still have not succeeded, but it is quite obvious that they are trying.

If as a result of all this, helicopter re-supply to forward areas is considered too dangerous, this will impose considerable extra strain on resources, as may already be happening. But it also calls into question the prevailing narrative that more helicopters are the answer to reducing troop casualties.

As we have pointed out, again and again, more helicopters operating in a highly insecure environment, could simply expose troops to a different kind of risk, with the possibility of casualties in the 40s. That would be a "game changing" event, creating huge political pressure for withdrawal.

This loss, therefore, could have significant implications for on-going operations and raises serious questions as to the overall tactics of "take and hold". Already, we have seen complaints of the huge "percentage of time and effort sucked up into the black hole" of orchestrating road moves, simply to re-supply outposts. The situation could be about to get a whole lot worse.