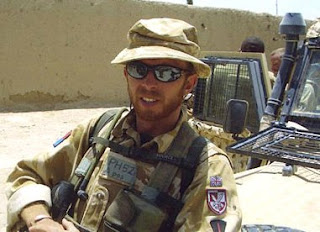 On 14 June 2006, under the by-line of Michael Evans, defence editor, The Times ran a story about the death of Captain James Philippson, the first British soldier to be killed in southern Afghanistan.

In a narrative attributed to "senior military sources", we were told that Philippson had "died while trying to rescue a wounded colleague under enemy fire," the paper then retailing a lengthy derring-do account of his exploits.

The following February, a factual and largely unchallenged account of the events leading to Philippson's death was published as part of a Board of Inquiry report. So different was this account that it became manifestly clear that Evans's original was a work of pure, unmitigated fiction.

To my knowledge, Evans has never published a retraction or correction of his story – the MSM never feels the need to apologise. In fact, an even more lurid account of these fictional events found its way into Sean Rayment's book, "Into the killing zone", albeit lacking source attribution.

A year after the Board of Inquiry report, the events came before assistant coroner Andrew Walker. He chose to ignore the substantive findings of the Board and instead focused on what were tangential issues which had not materially affected the outcome of events – specifically a shortage of equipment and in particular night-vision goggles.

On the basis of his narrow and partial perspective, Walker was thus able to launch into a strident attack on the government, accusing it of causing an "unforgivable and inexcusable breach of trust" with the Armed Forces by sending soldiers into combat with "totally inadequate" equipment.

Outside the court, Tony Philippson, the understandably aggrieved father, was given free rein to declare that it was a disgrace that troops had been sent to fight terrorists without sufficient kit. "I hold the MoD responsible for my son's death but in turn they were starved of cash", he said, accusing the then "parsimonious" chancellor Gordon Brown of not spending money and "risking soldiers' lives".

Never knowingly missing an opportunity to score a cheap political point, shadow defence secretary Liam Fox then weighed in, declaring that the Coroner's findings were "a damning indictment on Labour's treatment of our Armed Forces". "The Government were willing to do the one thing which is unforgivable which is to commit troops to battle without due protection," he said.

So it was that the "Philippson affair" became and has remained a political football, the precise events of the Captain's death buried in a welter of acrimony and accusation, the mythology unchallenged.

What has been challenged, though, is the original finding of the Board of Inquiry which considered that Cpt Philippson had been killed as a result of "poor tactical decision-making, a lack of SOPs (standard operational procedures) and a lack of equipment." In particular, the unit's commanding officer, Major Jonny Bristow came in for some criticism.

We now learn from The Sunday Times that, following assiduous lobbying from Tony Philippson, the Board is to revisit its findings whence it is "anticipated" that it will dismiss the original criticisms that the rescue mission in which Philippson died was an "ill-prepared rush", asserting that soldiers were properly briefed and overall preparation was adequate given the need to deploy the soldiers rapidly.

However, such is the strength of the prevailing narrative (government baaaaad, Army goooood) that, on the basis of these "anticipated" revised findings, current defence secretary Bob Ainsworth is accused of a "cover-up" over the death of Philippson.

The charge rests on an interview just hours after last year's inquest when Ainsworth, then the armed forces minister, confronted with the coroner's comments about inadequate equipment, "attempted to shift the blame onto Bristow", referring to the Board which had also found there were a "lack of standard procedures and tactical errors too".

This, of course, was no more or less an accurate reflection on the Board's views, but now says Philippson senior, the "anticipated" revised findings "will prove Bob Ainsworth was trying to cover-up the real reason for James's death. He was trying to shift blame away from the lack of equipment for which the MoD was responsible and negligent." "James was a friend of Major Bristow and the suggestion that he played a part in my son's death is despicable," he adds.

Whatever sympathy one might have for a bereaved father, it has to be said that this chain of logic is tortuous at best, if not tendentious. But it is nevertheless sufficient to permit The Sunday Times to run as its page-lead the headline: "Bob Ainsworth in 'cover-up' over soldier's death."

Tony Philippson, though – unwittingly or not – is in tune with the media narrative and is thus allowed to say: "Bob Ainsworth is not fit to be secretary of state and lead the armed forces. Blaming a commanding officer for the MoD's failings is outrageous. He should resign his post with immediate effect."

There may, in fact, be many reasons why Bob Ainsworth is not fit to be secretary of state but, in fairness, this is not one of them. Whatever the new board of inquiry might find – and its report is many months away – it can hardly change the basic facts of the narrative account. Any sober assessment of that narrative can only lead to the conclusion that the events which led to the death of Cpt Philippson did not represent the Army's finest hour.

But, as long as the prevailing narrative remains in force, we will not find in the media any suggestion that the military can in any way be at fault, even in the smallest of ways. Government baaaaad, Army goooood is what we are told, and that is what we must believe.