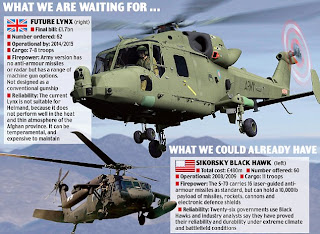 Belatedly, the media are beginning to take an interest in the Future Lynx – now improbably named the Wildcat - with The Daily Mail today complaining that:

Britain is buying 62 Lynx Wildcat helicopters from AgustaWestland at a cost of £27 million each but they will not be available to equipment starved troops until 2012 at the earliest - four years after they could have had cheaper US helicopters.

While we can applaud the fact that, at last, a newspaper is actually taking some interest in this issue, with some exasperation we note that we actually first wrote about this in June 2006 when there was an equally pressing need for helicopters in Iraq, and it was in April 2007 that we drew attention to the extraordinary cost of running the current Lynx fleet, and the availability of cheaper and more effective alternatives.

Now that the Future Lynx contracts are in place, and it is far too late to do anything about them without incurring massive cost penalties, we have the media taking an interest – effectively three years too late. Nor indeed has the Mail even begun to understand the complexities of the Lynx story, some of which we have been following on this blog.

Rather than deal with the issues, the Mail picks a political "line" with its deputy political editor Tim Shipman telling us that British soldiers in Afghanistan are paying a "blood price" over a deal for new helicopters, after the MoD handed a £1billion pound contract for the helicopters to a company that then hired the department's top civil servant.

The civil servant in question is Sir Kevin Tebbit, permanent secretary at the MoD when the Future Lynx deal was struck in 2005 (it was actually "struck" in 2006). He later joined the boards of two of the companies building the helicopter. Firstly, as the Lynx deal was being announced in June 2006, Sir Kevin was signed up as a member of the Smiths board. Then in May 2007 he was asked to be chairman of Finmeccanica, the company which owns AgustaWestland, a post he took up that July.

Company records, Shipman tells us, suggest that Tebbit is now pocketing in excess of £100,000 a year in his role as chairman of Finmeccanica and another £52,000 from Smith Industries.

This political angle comes from Tory MP Douglas Carswell, who seems first to have raised the Lynx issue in parliament in October 2007, reiterating many of the complaints raised in this blog (without acknowledgement, as is his habit), but has since raised it in parliament (according to the Hansard website) only twice.

This compares, incidentally, with the nine questions raised by Ann Winterton, who has been persistently probing inadequacies of the Lynx without the flashy, self-aggrandisement for which Carswell has become notorious.

In fact, the Tebbitt issue is irrelevant to the Lynx story. The idea that one man – even one of such high rank - could steer this contract in a particular direction is absurd. And, as the MoD points out, Sir Kevin was not involved in the decision to buy the helicopters. It was taken by ministers on the advice of the MoD Equipment Approvals Committee of which he was not a member.

What Carswell has done, probably unwittingly, is touch upon a bigger, more sinister problem, where the defence industry routinely buys influence by offering jobs, consultancies and directorships to civil servants, retired officers – such as the former CDS Charles Guthrie - and even former ministers, not necessarily to steer specific contracts but to shape policy and ensure that the industry voice is heard in the right quarters.

This, we came across in the murky tale of the Panther procurement, where the civil service desk officer administering the programme was subsequently given a consultancy by the vehicle manufacturer Iveco.

There is also the unexplained but highly suspect decision to favour the Piranha over the French VBCI for the FRES utility vehicle, while the decisions to purchase the British-built Pinzgauer Vector and the Jackal also smell of insider dealing.

This is not "corruption" in the sense that there are brown envelopes being handed under the tables in high class restaurants. It is more subtle than that, but it amount to the same thing. The defence industry is indeed buying influence, putting its interests above both the defence and national interests.

And, as we have seen, the industry is highly effective in censoring debate, ensuring that its critics are not heard.

Such issues, however, do not address the immediate problem of the Lynx. In fact, the deal is done and dusted, making the Mail indignation somewhat superfluous. But it does point up the vital role of procurement, and the effect murky decisions, made years ago in the corridors of power (and the fine restaurants and bars) do eventually extract a price when our troops are saddled with inadequate kit or, in this case, no kit at all.

Thus, The Mail is correct to write in terms of a "blood price", but one has to say that the media, in its refusal to take procurement seriously, is part of the problem. Neglect of such a vital subject also has its "blood price".