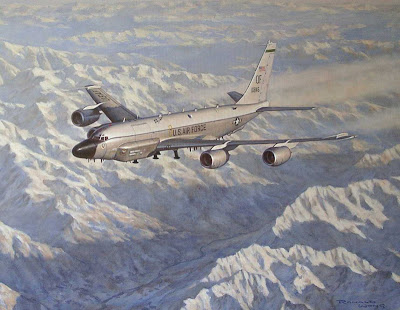 Today's picture is a reproduction of a painting (lithograph available here) of a Boeing RC-135 "Rivet Joint" electronic surveillance aircraft. In the picture, it is seen flying over the Hindu Kush in northern Afghanistan.

The aircraft itself assumes topicality from a report in this week's Times by defence correspondent Michael Smith, who reveals that the RAF is to lease two of these aircraft. They will bear RAF markings and be operated jointly by RAF and USAF crews.

The deal has been concluded, we are told, to replace the currently operated Nimrod R1 electronic surveillance aircraft (pictured below), which have been doing good work on deployment in Afghanistan.

The move, writes Smith, has been forced by a MoD cash crisis that rules out the money for a replacement aircraft for the R1, and has, he adds, "provoked outrage among RAF air crew who say it will mean a major loss of capability." 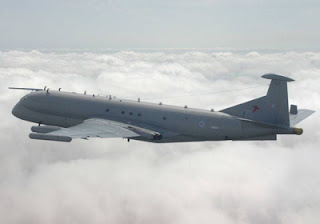 However, it seems the MoD has said that a final decision had not yet been taken, although Air Marshal Sir Glenn Torpy, chief of the air staff, briefed air crew during a visit to the Middle-East just before Christmas. Then, according to an unnamed source, "He told the R1 crew that he had brought them an early Christmas present."

But when he described the plan to use the RC135 Rivet Joint spy planes the response was blunt. It was so unenthusiastic and blunt that several RAF officers were subsequently hauled up before their commander for a dressing-down, the source said.

This is elaborated on by another "insider" who says, "I am incandescent with rage that we are even considering ditching what is a world-class, 'gold standard', war-winning capability in the name of economy and the dubious claimed benefits of greater interoperability with the USAF."

The R1, we are told by Smith, is far more capable than the RC-135, which concentrates on communications signals and has only a limited capability against radars – although this may or may not be true, as the RC-135 has undergone extensive upgrades. 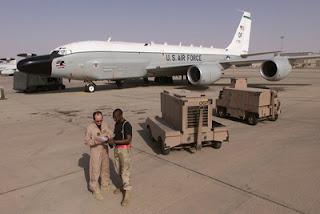 Smith then claims that RAF chiefs were to replace the Nimrod R1 with a different aircraft which could be fitted with a brand new top-secret signals intercept system called Helix, which is currently under development. This is not actually the case as Project Helix is an upgrade programme for the R1, valued at £400 million, intended to keep the aircraft in service until 2025.

The final decision on the programme is due to be made in June 2009. It is not clear, therefore, whether Project Helix has been abandoned or whether the lease of the RC-135s is simple a stop-gap measure to enable the R1s to be withdrawn for refitting and upgrading. Smith seems to think it is a long-term solution – one which appeals to RAF chiefs "who are under pressure to find cuts to ease a £1bn black hole in the MoD’s finances."

As always, therefore, we do not have the whole story yet and will have to wait, until there are some official announcements for a little more clarity. Meanwhile, enjoy the picture of the latest addition to the RAF's inventory.