The enemy owns the terrain 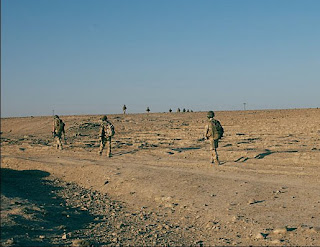 Whether it was his intention or not, the overpowering impression conveyed by Michael Yon's most recent post is one of utter hopelessness.

We see small numbers of British troops, besieged in their own garrisons, completely under-resourced and unable to prevail, with the Taleban operating freely under their very noses, dominating the surrounding countryside.

What brings this home is Yon's description of the difficulty in transferring from the main operating base in Sangin – FOB Jackson – to the secondary base at Inkerman. Although only four miles away, walking or driving was not possible. Enemy control of the terrain is so complete in the area between Sangin and Kajaki than the route was deemed too dangerous. Helicopter lift is required.

However, writes Yon, we need more helicopters. The helicopter shortage is causing crippling delays in troop movements. It's common to see a soldier waiting ten days for a simple flight.

When Yon finally managed to get a seat, it did not take him direct to his destination. Instead, it flew probably eighty miles to places like Lashkar Gah, and finally set down at Camp Bastion. The helicopter journey from Jackson began on 12 August and ended at Inkerman on the 17th. About five days was spent - along with many thousands of dollars in helicopter time - to travel four miles.

At Inkerman, it is still mostly a gunfight, though the use of bombs is increasing. The base sits on the desert side of "highway" 611 that goes from Highway 1 (the "Ring Road") to Kajaki. The 611 marks the border between the deadly Green Zone and the desert. The road is almost completely controlled by the enemy. Only tiny patches of the 611 are under serious NATO/ISAF influence.

Some will take issue with this statement, Yon writes, then adding: "if they claim to be in control, they should readily accept the challenge to drive in an unarmoured car in those areas they claim to control."

Only two platoons are stationed at Inkerman, which means only one platoon at a time can leave the base. But using one platoon to cover this area is like trying to water a football pitch with a drop of water, Yon observes. The enemy fights just outside the base, even planting IEDs in view of the guard towers.

This is not the only base under pressure. There are several satellite FOBs and Patrol Bases, each of which is essentially cut off from the outside world other than by helicopter or major ground resupply efforts (which only take place about once a month).

The latest ground resupply effort from Camp Bastion resulted in much fighting. The troops up at Kajaki Dam are surrounded by the enemy, which has dug itself into actual "FLETs." FLET is military-speak for "Forward Line of Enemy Troops." In other words, the enemy is not hiding, but they are in trenches, bunkers and fighting positions that extend into depth. The enemy owns the terrain, writes Yon.

So different is this picture from that we see presented on the MoD website, for instance, that it is impossible to reconcile what we are told officially with what Yon tells us. But then, from the tip of the spear, we get this:

The soldiers keep streaming in from the mission. The Pentagon and British MoD spin lies (though I have found Secretary Gates talks straight), but veins of pure truth can be found right here with these soldiers. The Pentagon and MoD as a whole cannot be trusted because they are the average of their parts. There are individual officers and NCOs among the US and UK. who have always been blunt and honest with me. Among the higher ranking, Petraeus and Mellinger come to mind, but for day-to-day realities this is where it's at. Out here. Nothing coming from Kabul, London, or Washington should be trusted.

So much of this have we heard previously, with the MoD issuing structured lies about the situation, that, in fact, there is no difficulty in accepting Yon's version and rejecting the official "spin".

"We owe it to all those that are sacrificing themselves in Helmand, to be brutally frank about what is going on there and what is going wrong," said Stephen Grey recently, "because it is only with that frankness that I think certain things can be put right."

Yet compared with the candour of Yon, we get the mindless assertion of our Chief of Defence Staff. Nothing coming from London should be trusted, says Yon. Quite.