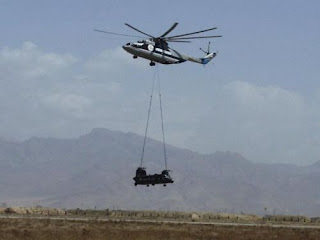 Reports coming in tell of another RAF Chinook having been destroyed in Afghanistan.

This time, according to the MoD, enemy action was not thought to be involved. The helicopter, lifting 15 soldiers to a location six miles east of Sangin, made a "heavy landing" and sustained damage to its undercarriage, nose and front rotor. No one was hurt and the troops were allowed to continue their mission, the crew being evacuated by one of two other Chinooks which were taking part in the same operation.

The aircraft was unflyable and was later blown up by military personnel. The decision to destroy rather than retrieve the aircraft was taken "due to the difficult terrain and poor security situation around Sangin".

With a replacement cost of anything up to £40 million, it says something of the tenuous situation in the Sangin location that an operation was not mounted to secure the machine and arrange its salvage. That amount of money involved must be worth some risk and, if this was deemed too great – which clearly it was – then it must have been significant.

Of course, it would have helped if there had been a Mi-26 handy (pictured) – whence terrain would not have been an issue - but the one we had is no longer available. Interestingly, the site seems to have been secure enough for land forces to place explosives, rather than relying on air-delivered munitions, as was the case with the previous Chinook which had to be destroyed.

Clearly, the loss of this helicopter – the second in 10 days – will add further stress to the already stretched lift capability, although all options are being considered for an early replacement.