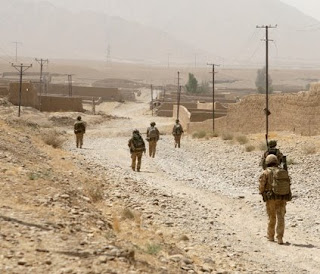 In our second look at the "Shotvarfet" report in The Independent today, we look specifically at our anonymous Captain's comments about equipment – which form a significant part of the piece.

Leading up to these comments, the human cost of flawed equipment is brought home as the Captain speculates on the effect on those who deal directly with the deaths and injuries, "who have to go into the Viking vehicles after the explosion to pull out the casualties, who have to tourniquet the remaining stumps after both the legs of a person have been blown off, those who have to pick up the leftover pulpy fragments of a disintegrated body and put them into a bag."

The reference to Vikings is especially significant here, as in a number of instances, we have seen recorded their use in supply convoys. Due to the pitiful numbers of support helicopters and Apaches needed to escort them, we are told, every day troops on the ground are forced to expend an enormous amount of hours and manpower just standing still.

They sacrifice their reserves of energy, motivation and willpower securing and picketing routes for the never-ending vehicle convoys that have to keep happening in order to resupply the patchy spread of patrol bases with water, ammo and rations; as well as recovering the vehicles that invariably go into ditches and securing helicopter landing-sites for the evacuation of casualties from improvised explosive device strikes.

The Captain then goes on to say:

If someone provided one of those garishly coloured (army) pie charts depicting the percentage of time and effort sucked up into the black hole of orchestrating these road moves, it would provide a statistic that would be both shocking and embarrassing. It might also partly explain why the military is struggling to gain an advantage over the Taliban and cannot hold a significant amount of ground.

Its energy, time and focus is bound up with those road moves, and our most vital asset, our troops, are either sweating on the sides of the roads, securing them, or sweating inside the vehicles of those often doomed convoys. I am not criticising the military on the ground, who have to deal with this dilemma.

Everyone seems to already agree on this issue of the equipment, in particular the lack of support helicopters – which rather begs the question of how on earth is nothing done about it? And how does the fact that nothing gets done about it seem to be the status quo and keeps occurring year after year, budgetary policy after budgetary policy, operational tour after operational tour?

If a magic genie were to appear in front of my eyes, who in keeping with the spirit of the present credit crunch cutbacks, could afford to grant me just one wish, I think I would simply choose a massive increase in helicopters and pilots – a wish that would have such a crucial influence on what is happening to the British Army out here.

Thus we have the helicopter issue writ large, in particular the logic of replacing time-consuming, expensive convoys and vulnerable convoys with helicopter supplies, the logic of which we explored nearly two years ago.

Here, first hand now, we have evidence of the extraordinarily debilitating effect of the shortage of support helicopters, forcing much of the available effort to be devoted simply to supporting outlying bases – effectively creating the "self-licking lollipop" phenomenon, of which we have written before.

What also comes over from the Captain is the number of troops deployed not only in the convoys, but in securing the routes down which the vehicles travel. Yet, as reported by the MoD website, there are other means of securing road security. The MoD report records how a US Apache helicopter chanced upon a bomb emplacement team, killing two of them, allowing ground troops to move in and remove the bomb.

This points up the role not only of support helicopters, to deliver supplies, but the vital role of airborne surveillance, a role for which light helicopters such as the Kiowa would be admirable, a point we have been making for something like three years.

However, to narrow down the issues simply to "one wish", calling only for more helicopters, is to over-simplify a complex situation and, in some respects, to miss the point. It is most certainly the case that more helicopters are needed but, as we argued earlier, it is important that British troops do not abandon the road network. Their presence is needed to provide security, not only for themselves but for the Afghan security forces and the civilians.

Thus, we need a whole range of measures and kit, of which helicopters are only part and, in some respects, not even the major part. Where the Captain sees our troops "sweating on the sides of the roads, securing them," a whole range of machines, from UAVs to Buffaloes, Huskies, mast observation vehicles and other aids to could the job, most often better without putting men at risk.

Emotive and powerful though the Captain's message is, therefore, it dwells on what is but actually offers very little insight as to what could and should be done. It is a cry to the heart, not an appeal to the brain.

Similarly thus does he frame his appreciation of the Taleban. "We are dealing here with a tenacious and stubborn enemy," he says. "Despite our dropping bombs on compounds that the enemy is using as firing-points, the very next day, new enemy fighters are back." Once again he continues, in a despairing vein:

On the one hand, perhaps the enemy command is so feared, authoritative and manipulative that they force unwilling fighters into those compounds as pure cannon fodder. On the other, perhaps, the fighters willingly go back, despite their comrades having been killed there, so strong is their faith in an afterlife, or so strong is their belief in the jihad they are fighting.

Whatever the reason, they come back undaunted to the same firing-points, despite our overwhelming fire power. Their numbers seem to stay constant, as opposed to decreasing – all of which gives a strong indication that we will not be able to reduce their numbers to a level where they are tactically defeated.

It seems increasingly true that a stable Afghanistan will only be possible with some sort of agreement, involvement or power-sharing deal with the Taliban.

However, as the British Army units here are increasingly sucked into the turmoil of the latest "fighting season" there seems little evidence that anything is happening on the political and diplomatic stage. In the meantime, tour follows tour, during which the most intense fighting appears to achieve not much more than extremely effectively inflicting casualties on both sides, whilst Afghanistan remains the sick man of Central Asia.

Such an appreciation, of course, is way above the Captain's pay grade. Officers of that rank are not employed to carry out strategic analyses, and neither are they qualified so to do. This is the classic example of where "being there" offers no more strategic insight than could gained from gathering the received wisdom of his peers. That it comes from the front line does not make it any more valuable.

The strong anti-war vein running through the "dispatch", however, clearly suits the Independent agenda, which is possibly why it has been given the prominence of its front page.

If the piece also tells us that war is "hell", as if we did not know, its other contribution is more subtle. In its tone, it is redolent of the diary of Lieutenant Mark Evison who, in respect of his routine patrol duties told us, "There is a definite lack of steer from above as to how to play this one. I am yet to be given a definite mission and clarity as to my role out here."

That same sense of lack of clarity of purpose pervades the dispatch of our anonymous Captain. To that extent, the Captain reveals perhaps more than he intends (or not). It is a cry of despair which speaks loudly of the inability of his superior officers to convey to him a coherent strategic picture, possibly indicating that they too lack that picture.

The worrying thing is that the Captain sounds like a member of a defeated army. If battles are won and lost in the hearts and minds of men, this one may be lost.