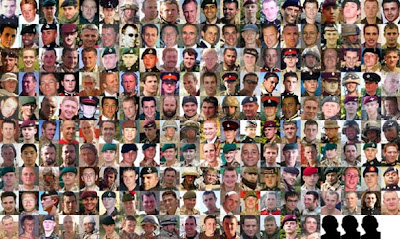 Like vultures watching for the dying man to expire, the serried ranks of hacks and their editors are poised, keyboards at the ready – with picture editors on standby – waiting for the 200th soldier to be killed in Afghanistan.

The suspense, however, has proved too much for The Times, which has already published a piece from its defence editor Michael Evans on the impending death, allowing it to display the statutory graphic showing not 200 but 199 "thumbnails" in a grisly montage (pictured above).

Evans's piece is headed "200th death in Afghanistan will raise questions over UK strategy," with the strap declaring: "The decision to begin the campaign in Helmand with such a small number of troops was dangerously shortsighted."

Nevertheless, it begins with a statement of the obvious, telling us that the MoD "is preparing itself for an outpouring of emotion - and possibly recrimination". No more or less did we write last Sunday, when the headline figure had reached 196.

We are reminded though that all but five of the deaths have arisen since the government's decision to send a brigade to Helmand province in the spring of 2006 and, writes Evans, judging by the comments from ministers and military commanders at the time, there appeared to have been no concept, let alone intelligence assessment, of an impending campaign that would, within three years, increase the number of deaths of members of the Armed Forces to 200.

In hindsight, and with the 200th British death sadly imminent, we are then told, the decision to send just 3,300 troops to Helmand was dangerously shortsighted. It was never going to be enough for a province of such size.

Readers expecting any discussion of strategy, however, are going to be disappointed. The focus is entirely on troop numbers, as we are told that in 2009, Britain has 9,140 troops in Afghanistan, about 6,200 of them in Helmand, and the province is awash with thousands of US Marines and counterparts from Denmark, Estonia and other coalition members.

But, writes Evans, "the Taleban appear to have an inexhaustible supply of reinforcements and they fight in the same way the Mujahidin fought the Russians in the 1980s - with territorial cunning and knowhow and by intimidating the locals to protect them and provide refuge."

Thus, he says, the landmark of 200 deaths - 195 of them in the last 41 months - will reinforce the growing realisation that, like the Russians before them, the British are learning the hard way about the resilience of Afghan insurgents.

Therein lies an example of the superficiality of our contemporary media. Of what we know of the Taleban, their number is relatively modest, perhaps no more than 20,000 effectives throughout the whole of Afghanistan.

While that is obviously an estimate (possibly not even the Taleban knows how many men it can call upon) the one thing we do know with certainty is that the Taleban are not "fighting in the same way the Mujahidin fought the Russians in the 1980s."

What is so very different, as the casualty details attest, is that the Taleban are largely avoiding direct contact with coalition forces. Instead, they are resorting to the use of IEDs on an industrial scale, devised with increasing sophistication and emplaced with considerable tactical skill.

In so doing, the Taleban are not attempting to win territory by force or arms but, in slaughtering coalition troops, are sending messages to the populations of the member nations, undermining popular support in the expectation that the abhorrence of the steady toll of deaths and mutilation will eventually force the withdrawal of troops.

Thus the use of the IED as a strategic weapon is entirely new and, as Gen Sir Richard Dannatt has finally recognised, the "disappointingly large number" of deaths from roadside bombs could lead to a reduction in public support for operations in the country.

That much though, even the so-called experts such as Professor Michael Clarke, director of the Royal United Services Institute, do not seem to understand, in common, it seems, with Michael Evans.

Dannatt, of course, has left it far too late, while Army doctrine is still floundering. On the 40th anniversary of the start of Operation Banner, when British troops were sent to Northern Ireland in what was initially said to be a "limited operation", we are now into the eight year of yet another "limited operation" and, it would appear, about as ill-equipped (both intellectually and physically) to deal with this one as we were in 1969.