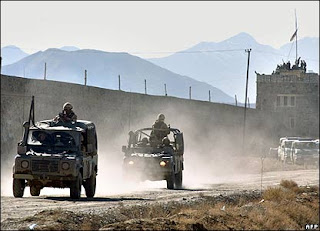 General Stanley McChrystal, the US military commander in Afghanistan is at least being candid, readily admitting that the Taleban have gained the upper hand in the fighting.

His widely reported statement came from an interview with the Wall Street Journal. Hours after it appeared, the Taleban launched a major attack on a provincial government and police headquarters near Kabul - 10 days before nationwide elections.

This episode rather confirmed McChrystal's view that the Taleban strength had grown as they had moved beyond traditional areas in southern Afghanistan to threaten formerly stable regions in the north and west.

Within the heartland areas of the south, however, the strength is matched by what commentators are beginning to acknowledge is an increased professionalism, with defence correspondent Robert Fox in today's London Evening Standard suggesting that the deadly ambush of the three members of the Parachute Regiment in Helmand indicated a great improvement in their tactical skills.

This is particularly the case in the use of their basic weapon, the buried IED, which emplacers seem to be able to lay at will, using greater imagination and skill in how they lay their traps.

That much is evident in the account of the latest British death, where we are told that Private Jason Williams was caught by an IED as he and his unit returned to the site of a previous ambush in an attempt to recover the body of one of three Afghan soldiers who had been killed. In what appears to be becoming something of a pattern, the Taleban had got there first – unobserved – and had prepared the ground, with devastating results for Pte Williams. 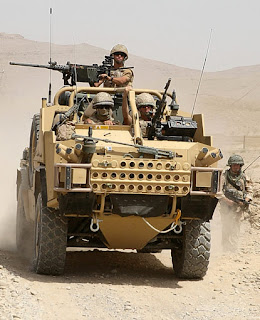 What is also evident is that both the British (ploughing up the desert in their Jackals - pictured right) and the better-equipped US forces in Helmand have been caught out by the scale and inventiveness of the Taleban bombing tactics. Thus, while the British lost 22 soldiers last month, the Americans lost 45. This month, while we have lost five, the Americans have so far lost 18.

Interestingly though, the national responses, seen through the prisms of their respective media, seem to differ. In The Washington Post today, we see staff writer Ann Scott Tyson offering an informative account under the heading "Potent Bombs Slow Marine Offensive", describing the experiences of US Marines in dealing with the IED threat.

The bombs, we are told, have forced Marine commanders to put long stretches of road off-limits, requiring troops to walk instead of drive. Marines on foot patrol must keep a keen eye out for dug-up dirt and "ant trails" that could cover a wire.

All of that, Tyson reports, has made for delays in supplying the troops - and, she writes, as one Marine company discovered in late July when its mission went badly off track, it has also required a diversion of manpower to the mundane but vital task of watching the roads, hoping to ambush anyone who attempts to plant a bomb.

This a carbon copy of the situation vividly described by the anonymous Captain, whose report we analysed yesterday. It is instructive, therefore, to look outside the narrow national perspective of the British media to find that US forces are facing exactly the same difficulties.

On the one hand, though, the Tyson piece points up the utility of the MRAPs, recounting how a Humvee is ripped apart by an IED, despatched to help recover a mine-resistant vehicle that had become stuck in a canal.

The bomb went off under the Humvee as it was returning with chains to hitch to the MRAP, preparatory to towing it out. And in one of those tragic ironies of war, the crew were only riding a Humvee because their own MRAP had been disabled by an IED. Two died and two were seriously wounded.

Had been in an MRAP, they probably all would have survived, was the view of the unit commander, 2nd Lt. Brendan J. Murphy. The battalion's weapons company commander, Capt David Snipes, was shortly to test that thesis when he approached the shattered Humvee, riding an MRAP. It too struck the bomb. The impact was like "hitting a brick wall," Snipes recalled later. The vehicle reared up and crashed back down.

Tyson records that, as Snipes made his way through choking dust to open the rear hatch, he was amazed to see the vehicle's 50-calibre machine gun sitting in the sand. "The 50-cal somehow went from the mount, past [the gunner's] head, and landed behind us," said Snipes. Surprisingly, the gunner was not badly injured.

Even the US forces are struggling with this attrition rate and, it would appear, lack enough surveillance assets to enable them to keep watch over the stretches of road down which they must travel. They too must commit to the manpower-intensive work of keeping watch 24 hours a day.

Seemingly uncomplaining – at least to Ann Scott Tyson, although the Marines reflected with some bitterness over the loss of their friends, and questioned whether many Americans appreciate, or even know of, their daily grind in the windswept purgatory of Helmand – an entirely different "line" is taken by the London Evening Standard.

Here, the paper has John Geddes, a former SAS warrant officer complaining that "futile" vehicle patrols during daylight were leaving troops as sitting ducks for the Taleban and costing lives.

His antidote is to learn the lessons of earlier conflicts, such as Northern Ireland and he thus calls for better intelligence — including gathering crucial information from paid informers — so that targeted night-time operations could be mounted to "take out" the insurgents' leaders. In the interim, troops should be moved by helicopter or only at night in targeted raids.

Once again, therefore, we see a one-dimensional approach to a complex problem, but with an added sour twist. Geddes blames the military's failure to adopt such tactics on interference from "grubby politicians who think they are generals".

This theme is expanded as Geddes argues that the fundamental problem is poor tactics. He adds: "Don't waste fuel on high-visibility patrols that turn into Taleban bomb runs; better spend the money on paying informants, so we can target the Taliban in their beds."

"Get their identities, the location of their arms caches and the co-ordinates of their encampments then go after them, turning the terror tables the other way round," he advises. "Carefully planned, covert night-time raids on known targets should replace the endless patrols."

Geddes then claims that the failure to pursue a more effective approach is because military chiefs were being restricted by political meddling. "Untie the hands of the army and unleash them on the enemy," he demands.

It is this willingness to focus blame on the politicians, or the amorphous MoD which seems to mark out the British "debate". This latter target comes under fire in The Daily Telegraph, which has Col Richard Kemp, a former commander of British forces in Afghanistan, attacking the MoD for keeping hundreds of armoured vehicles "parked up doing nothing" in Ashchurch. "You have to ask why our troops are still running around in Vikings, when they could be using the types of vehicles parked up in Gloucestershire," he says.

This focus perpetuates the narrative which, in its most simplistic form, paints the black and white picture where "Our Boys" and their gallant commanders, are the good guys, much put upon by the heartless bureaucrats of the MoD and the uncaring, penny-pinching Labour politicians.

Not for one moment does the narrative deviate to allow that, under no circumstances, do politicians interfere with Army tactics – as Geddes alleges – or that, when it comes to the paucity of mine-protected vehicles in theatre, this as we have reported is most definitely the results of decisions made by the Army high command, in defiance of the politicians' wishes that the protected vehicles should be deployed early.

Such is the power of the narrative though that, for want of informed comment, The Daily Telegraph enlists the ever-willing renta-mouth, Patrick Mercer, to blame "cost concerns". "This is outrageous," he shrieks. "I have been talking to men who are out in Afghanistan. They are crying out for these armoured vehicles." Then we get the narrative: "The vehicles are not being sent where they are needed because of tight defence budgets – no more, no less than that."

In truth, both the US and the British military have been caught out, in what was an entirely predictable development. Once again, we have to recall that, in June 2006 – over three years ago – Ann Winterton asked the defence secretary:

The answer then was a classic in studied complacency. Defence minister Adam Ingram responded:

Then, in November 2006, it was being openly acknowledged in the media that "Taleban minelaying tactics [are] worrying Nato" (above left - click to enlarge), when it was all too clear that this was the direction the campaign was going to take. Three years down the line and troops of both armies are getting "minced".

Of course, the man in charge of the British Army at that time was General Sir Richard Dannatt. Yet it took him until July of this year to say that: "It is time for expenditure on counter IED to move from UOR to core business. If we accept that we will be in Afghanistan for three to five years and beyond, there is no doubt that this is now our core business."

This is the man who, in support of his FRES project had, to that date, resisted including IED protected vehicles in the Army's "core business". Now that IEDs are indeed "core business" (certainly of the Taleban), we are paying the price of three years of neglect.