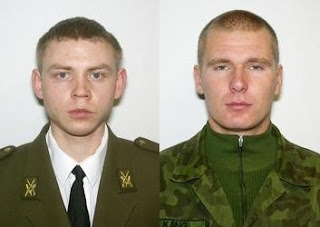 The lottery of death and mayhem that characterises the campaign in Afghanistan has this time cast its shadow on two Estonian soldiers, Eerik Salmus and Raivis Kang, both 26 (pictured). They died on Sunday after their unit came under fire while clearing explosives from a road in Nad-e-Ali.

Their deaths are in addition to the loss of a US soldier, but they will not be equally mourned. The US contingent will look after its own but, the deaths of the Estonians, as part of a small contingent serving a small nation, will be largely unregarded outside their own country.

The point is though that the Estonians, highly regarded and respected, are an integral part of the British command, working alongside British troops, supporting them and sharing the risks. And, working in Nad-e-Ali – the focus of Operation Panther's Claw – they were performing tasks that would otherwise have had to be done by British soldiers (or Danes). It could so easily, therefore, have been British casualties that were recorded.

There is a tendency, however, both with the MoD and in the media, to treat the deaths of "foreigners" as somehow less important as our own. Yet these troops are our coalition allies, working alongside us, dying for the same cause.

One would expect the media to display its usual narrow parochialism, but there is no excuse for the MoD. Since it regards part of its duty, the promulgation of casualty details on its website, it should record the passing of two soldiers who were also serving under British command. There is equality of risk – there should be equality in death. We owe them that.