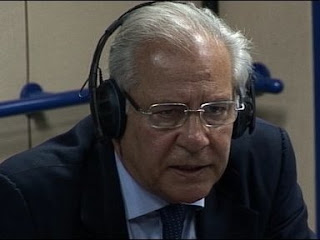 It was only yesterday that we were complaining of the "stock merchants". They are not getting down in the weeds, picking up raw data or attempting systematically to collect data and analyse it, building their views and crafting their phrases on the basis of what the evidence tells them.

Another of these merchants is in full flight today, none other than Lord Guthrie, former CDS. He is holding forth in The Times, inter alia about the mess over the Chinook HC3s, about which there has been a great deal written of late - most of it wrong.

Taking the rather tendentious assertions at face value, though, Guthrie launches into a familiar panegyric about these "lifesavers". They are, he tells us, the safest way to evacuate injured soldiers from the battlefield - and a brilliant tactical device to get behind Taleban lines to confuse and mystify the enemy. Chinooks, he then proclaims, also help resupply and reinforcement where land movement is dangerous.

What reveals this as mindless stock phrasing are recent events, not least the account of what we now know to be Operation Flint.

This, the Taleban attempts to down a helicopter, the shooting down of the Mi-26 and the more recent loss of a Chinook to enemy fire tells us that areas of Helmand have become very dangerous for helicopters, so much so that it is no longer safe to use them in some locations. Land movement may be dangerous, but helicopter movement is even more so, with the potential for far greater casualties.

Guthrie, however, does not even begin to address this issue and nor – as he should if he had the welfare of the Army at heart – does he draw attention to the fact that ground movement is needlessly dangerous, owing to the lack of appropriate kit, while seeking to maintain road security is consuming an inordinate amount of manpower, seriously degrading our military capability and, in part, causing our excessive casualties. 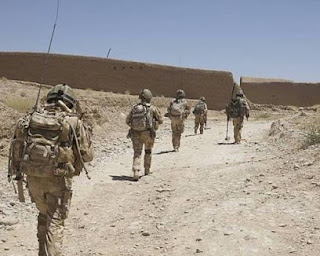 It takes one of our forum members to draw attention to the startling photograph taken by Michael Yon, showing troops clearing Pharmacy Road using hand-held mine sweepers, with not an armoured mine detection or clearance vehicle in sight.

Nevertheless, the former CDS is voluble about his role in seeking to improve matters, reminding us that he "and other former chiefs of defence have repeatedly warned ministers" about the need for better equipment. But, while Dannatt is at last admitting that countering IEDs is now "core business", neither Guthrie nor the other former chiefs have ever warned about our grave deficiencies in anti-IED capabilities.

And, while the man then waxes voluble about the deficiencies of the MoD and the lack of political leadership, he never mentions or acknowledges that, when it comes to highly technical issues such as the complex equipment mix to deal with the IED threat, the lead has to come from the military. And it is there, as much as anything, that our problems lie, in the lack of high-level military leadership.

Meanwhile, Thomas Harding tells us that the British force in Helmand suffered one casualty for every Afghan vote in the area retaken from the Taliban during the recent and bloody Panther's Claw offensive.

By the measures the military themselves set, Operation Panther's Claw was a tactical and strategic failure. As such, it exemplifies the poor operational leadership in Helmand, about which Guthrie is also silent.

Interestingly, other things about which Guthrie seems always to be silent are his non-executive directorships of N M Rothschild & Sons Ltd and Colt Defense LLC – the latter one of the biggest arms manufacturers in the world. Both companies have significant financial interests in Afghanistan, which puts Guthrie in the same boat, but with an agenda he never declares.

Yet this is the man with whom The Times feels safe entrusting its latest batch of stock phrases. And therein is one of the reasons for the poverty of our defence debate.