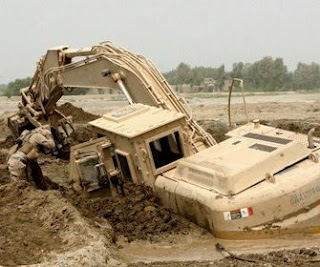 In an exchange with a military expert yesterday, one who describes himself as having made a good living critiquing UK MOD programmes, we agreed that the MoD – and the military generally (it is hard to draw a clear line between divisions and responsibilities) – is "essentially incompetent".

You have to look no further for confirmation of this than in today's Sunday Times, which has been able to get hold of a full copy of the 296-page Gray report on defence procurement.

Featured briefly by Channel 4 earlier this month, with the benefit of far more detail the paper is able to tell us that the scale of MoD bungling is so severe it "is harming our ability ... to conduct difficult current operations".

Using blunt language not normally seen in official documentation, the report by Bernard Gray, a former senior MoD adviser, talks of "lethal" weakness in government programmes and failings so bad they "cause damage to UK military output".

The report goes on to claim that, on average, new equipment arrives five years late and costs 40 percent more than first estimated. The MoD equipment programme is £35 billion over budget and – most damning – the MoD's incompetence is helping our enemies who "are unlikely to wait for our sclerotic acquisition systems to catch up".

The management is so poor, the projects so expensive and many items so out of date by the time they arrive that one defence expert is reported as saying sarcastically: "The system is failing to produce the equipment we don't need."

The Sunday Times gives the report full treatment, with an additional feature-length article and a leader.

Interestingly, the paper notes that Labour politicians, including Gordon Brown, have insisted that the money is available for British forces to have what they need to fight the Taliban but, it says, the MoD is so incompetent at procuring equipment that billions of pounds are being wasted, the wrong systems are being ordered and soldiers' lives are being put at risk.

Also of great interest, Gray dismisses claims — often made by Labour ministers — that cost overruns relate to projects inherited from the last Conservative government. "The analysis of the data suggests that the problems are widespread, affecting projects old and new, large and small, to a greater or lesser extent," he says.

However, The Sunday Times, in its own journalistic way, then seeks to makes political capital out of this. But to attach the whole blame to ministers is a travesty. The report does not do it. It focuses at least as much or more on senior military officers either working on procurement or making strategic decisions about procurement. In particular, it criticises inter-service rivalry, lack of commercial competence and other issues which drag the system down.

However, comprehensive though the Times report might be, this only deals with one aspect of the defence activity. As we have remarked previously, the military is equally sclerotic when it comes to devising and updating doctrines and, as one of our recent posts might indicate, lethally slow when it comes to adjusting tactics to deal with the realities of the battlefield.

Small anecdotes tend to confirm this. Recently, a soldier, who had completed tours in both Iraq and Afghanistan, found himself being instructed by seniors in tactics and procedures which had long been discarded in theatre, then being required to become proficient in them for his promotion examination.

Across the board, therefore, we are looking at an institution (or institutions) which are basically incapable of dealing with a lean, adaptive enemy such as the Taleban, and which will always be left floundering, behind the curve, as it has so often been.

It is on that basis that I came to the conclusion that we cannot win this conflict, and we should therefore withdraw.

I have searched my heart and conscience long and very hard on this matter and while, intellectually, I remain convinced that this war is winnable, I cannot convince myself that our military, as an institution – saddled with its own corporate inertia and the incompetence of the MoD – is up to the task. It can no longer conduct effective operations and gain operational and thus strategic success.

On this, it would appear, I am in tune with public sentiment – if not necessarily for the same reasons. In a Mail on Sunday poll, more than two-thirds of respondents (69 percent) want our troops withdrawn from Afghanistan. Only 31 percent believe the mission is worthwhile.

Downing Street advisers, we are told, had hoped that the prime minister could swing public support back behind the war by making the strategic objectives clearer. But 74 percent claim to understand the government's objectives, implying that they do not think them worthwhile or achievable.

Previous polls, this paper reminds us, have shown opinion to be evenly split on the issue. It thus suggests the milestone of 200 British deaths, passed a week ago, has proved a tipping point. That is probably the case and sentiment, at least under this administration, is probably irrecoverable. It is unlikely even that the incoming government will be able to claw back support, especially if we see the casualty rate continue to climb.

Personally, I do not know what it would take to convince me that the mission is worth the grief, and I doubt very much whether there exists within the MoD the ability to make the case that would bring people back on board.

In October 2007 the CDS was admitting in respect of Iraq that the government as a whole – including himself - had not communicated the strategic position very well. They have done no better with Afghanistan and now appear to have left it too late. They are so bogged down in their own incompetence that they cannot even dig themselves out of their hole.