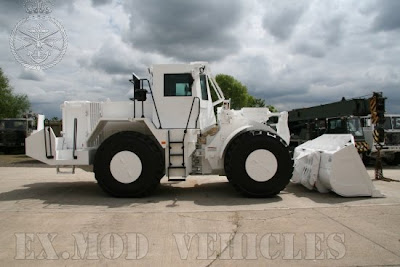 In December last, the media was accusing the Army – short of engineering equipment in theatre – of buying up commercial JCB diggers, giving them a lick of camouflage paint and sending them to Afghnaistan. This, we averred, was a "cheap shot, and wholly wrong". The Army had bought state-of-the-art JCB High Mobility Engineer Excavators (HMEE) - custom-designed military equipment, complete with armour.

As it turns out, although the HMEEs were on order, the media was right and I was wrong. As the latest post from Michael Yon illustrates, the Army is indeed using ordinary, commercial JCBs in theatre, although they have armour bolted onto the cabs as well a paint jobs.

Whether these have been bought specifically for theatre, however – or simply drawn from stock and armoured – is not known. It would hardly seem rational to by new plant, as the MoD seems to have a considerable surplus of these machines, to the extent that it is selling some off from its reserves - unused.

This was also the case with its armoured bucket loaders which are still on sale, and the Combat Engineering Tractors, which have some life left in them and are a bargain for less that £10,000 each. In fact, there is a whole raft of new and nearly new construction equipment available and even heavy-duty military bulldozers - all ex-MoD.

What makes this so important is that Israeli and US experience demonstrates that the right sort of engineering equipment is not only a force magnifier but also a life saver. Given its willingness to hazard flesh instead of using steel, and the general lack of plant available in theatre, it is easy to gain the impression that the Army is not really trying.