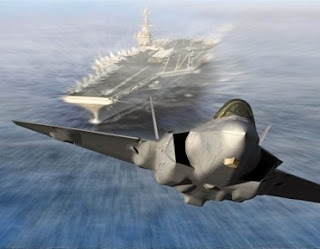 It is rare that one hears good news from the procurement front these days but, if Thomas Harding's story in The Daily Telegraph yesterday is correct, then a tiny ray of sunshine has broken through the gloom in Whitehall.

This is the story that the British government is leaning toward purchase of the "C" variant of the F-35 Lightning II - otherwise known as the Joint Strike Fighter – the type specifically designed for conventional carrier operations rather than the short-take off and vertical landing model, the F-35B.

The defence advantages of the "C" model are obvious. The aircraft, relieved of the burden of having to carry an extra lift engine and a complicated vectored thrust nozzle on the main thrust engine, and the control bleeds, has a longer range, can carry more ordnance and is easier to fly. It will also be considerably cheaper, at an estimated £90 million per model as opposed to £105 million for the "B", with technological issues still to be resolved. That, against the projected 150 order, could save us £2.2 billion.

Against that is the cost of modifying the two carriers we have planned, installing catapults and arrester gear to deal with the F-35C, but that also confers operational advantages. The carriers will be able to receive aircraft from other carriers – known as "cross-decking", which will extend the flexibility of the asset when working with carrier groups from other nations.

Importantly, our carriers will also be able to operate a wider range of aircraft, including fixed wing Airborne Early Warning (AEW) aircraft such as the Hawkeye, instead of having to rely on helicopters with their limited endurance and altitude.

That said, such is the inter-relationship between the defence establishment and the industrial complex that there is a serious downside. Writes Harding, up to
750 British defence manufacturing jobs are at risk as Rolls Royce produces the lift fan used in the "B" and it will therefore lose out on 150 engines, their replacements and the ongoing maintenance, worth potentially some £5 billion over the life of the fleet.

There is also the question of the estimated £500 million of taxpayers' money paid to Rolls Royce to develop this highly complex engine, which would end up fitted to the 600 or so "B" aircraft to be bought by the USMC and the USAF but would no longer be of benefit to the UK.

One presumes that the investment would be recouped by the sale of engines to the US although fewer units will now be bought, which might extend the recovery period – unless the price can be increased dramatically, which looks unlikely, given the mood of Congress. And neither the USMC nor USAF would welcome the price hike, which could do nothing for relations with the UK.

Harding points to other issues arising from this switch, if it occurs, not least that Rolls Royce was not widely consulted on whether a change might be made. He cites a defence industry source saying: "This is a massive decision as it changes the whole industrial landscape. This will have a hell of an impact on Rolls Royce ... ".

Nevertheless, officially, the "B" variant currently remains the MoD's "preferred solution", which means that there is much lobbying and plotting to do before the final decision is made.