A matter of interpretation 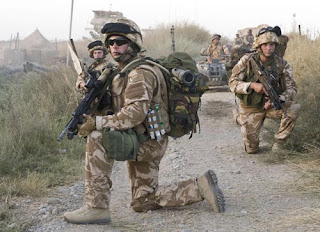 A tactical decision to pull some British units out of Sangin, in northern Helmand province, led to a surge in Taleban attacks in and around the town in which 14 British soldiers were killed by IEDs in five weeks.

Thus writes Michael Evans in The Times today, a report that can be interpreted at several levels.

The information comes from a "senior defence source", who says that to make up numbers for Operation Panther's Claw, units in Sangin were "thinned out". The Taleban had then suffered such heavy losses that they had looked elsewhere to see where they could inflict the most damage on British troops and selected Sangin for their attacks.

Ostensibly, this makes complete sense. That is what "guerrillas" do. If their enemy saturates one area with troops, the classic strategy is to move out and cause mayhem elsewhere.

That this was the dynamic at play is "confirmed" by Lt-Gen Simon Mayall. Commanders had used the resources available for the "main effort." "As a corollary, the Taleban moved elsewhere and they turned to Sangin," he says.

However, this may not be an accurate (or complete) explanation for what is happening. In Sangin this year, there have been 20 British fatalities. Six were killed prior to the start of Panther's Claw and 14 afterwards. But raw numbers do not tell the whole story.

Between 1 January and 19 June when the operation started, there were six attacks on British troops, giving rise to six fatalities. Three of the deaths were from shooting. Three were from IEDs.

After the start of Operation Panther's Claw, there were 14 deaths, but also six fatal attacks. The main difference was that all the attacks involved IEDs and three of them gave rise to multiple deaths: five, three and three respectively, accounting for 11 of the 14 deaths.

On the face of it, therefore, we are not seeing substantially increased Taleban activity in response to Panther's Claw, especially as half of the pre-19 June attacks took place in May, with one in early June.

What we are most definitely seeing, however, is a change in tactics. There is a greater reliance on the IED, with the use of multiple devices, and the sophisticated use of secondary devices, increasing the kill rate per attack.

Thus, while displacement of guerrilla activity is one thing, if the Taleban are increasing their kill rate for a roughly constant level of activity, this is a very much more serious development.

Unknown to us though is the number of unsuccessful attacks, those where injury and no deaths occurred, and those involving foreign nationals, which have not been factored into the story in The Times.

We do know from Michael Yon, however, that on 13 August, when three British soldiers were killed in one IED attack, there was another ambush which killed two interpreters. This was not recorded by the British media (or the MoD) – foreigners do not count.

This actually changes the arithmetic slightly, but we do not have enough information overall to draw definitive conclusions. But then, neither does The Times. Lt-Gen Mayall may know more, but he does not bring any facts to the table.

Crucially though, from what we know, we cannot assume that a reduction in troop levels in a particular location (and/or an increase elsewhere) is responsible for increased casualties. For all we know, more troops could have meant more patrols, more "targets" and more deaths. The precise situation, therefore, is not clear – to us, at least. It is a matter of interpretation.