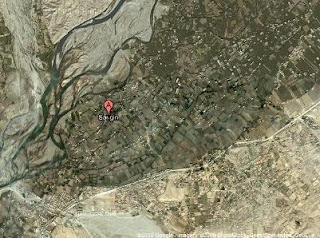 Those with a far more intimate knowledge of London than I will no doubt be able to put names to places and streets, but my lack of specific recall does not negate a general point that the design of central London owes much to military planning, and the need to defend important spaces.

Much the same can be said of many towns and cities in England and indeed, as this tract testifies, of many of the urban centres in Europe.

The relevance of this comes to mind as we read Sean Rayment's account in The Sunday Telegraph of the multiple IED ambush which recently killed three soldiers in Sangin (and five before them in July), fortified by the vivid description of a recent action in the town by Michael Yon.

The latter in particular describes areas of the town which form natural funnels and ambush points, without cover or escape routes, where the close-in ambush in which the Taleban seem to specialise can have particularly deadly effect.

On this basis, any rational appraisal of the prospects of successfully policing the town would necessarily conclude with the Irish Tipperary joke – where a local tells an American couple asking for directions to the town: "I wouldn't start from here."

That British troops are singularly failing to pacify the town and the surrounding countryside, therefore, is no reflection on their skills or courage – both of which, Yon will aver, they have in plenty. Simply, they are being asked to do an impossible task, venturing daily into the mincing machine to act as targets for an increasingly proficient enemy.

As we have argued in the case of roads, therefore, if the job is impossible for the infantry to deal with "as is", the only logical – and essential – course of action is to reshape the environment, better to enable troops to prevail against the enemy. In other words, it is not infantry but combat engineers that are needed, their task to re-plan and then rebuild the town (or parts of it) that will remove the death traps that are giving the Taleban their edge.

In any modern society, there are provisions in law for the state to intervene in town planning, not least through compulsory purchase of land which is required for development. In the context of the urgent need to control and effectively police the town and its environs, if such provisions do not exist in Afghanistan, then they need to be introduced as a matter of urgency, then to allow the (armoured) bulldozers to move in.

It is unlikely that our engineers have need of any guidance, but should they require an aide memoire, this US army manual of 1897 will tell them all they need to know, so well-established are the principles. And, without their application, any occupation and intended pacification is merely going through the motions, sacrificing young men on futile gestures.

Bearing in mind that Gen Richards is talking of a 40-year occupation, the current strategy of "mowing the grass" is no more likely to produce dividends over that period than it has over the last three, while the current casualty rate is more likely to ensure the complete removal of our forces within the decade, their mission unfulfilled.

Our forefathers knew what it took to impose the rule of law. Major surgery is required on the town and its environs, or we will see much more of it, of a different kind, in Camp Bastion hospital.